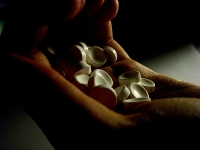 A chilling article by Salon and AlterNet exposes the devastation that prescription drug abuse is causing much of America.

For large swaths of the country, “Pill Mills” that provide mood altering drugs for the slightest excuse, are a fact of life. “Pilling” – trading drugs with family, friends and strangers for a mix-and-match high – is a fact of life. The devastation caused by prescription drug-related crime, too, is a terrible fact of life.

Drug abuse has always been a fact of human culture, but some cultures have handled it much, much better than others. Cultures that utilized drugs like peyote and ayahuasca as part of sacred rituals did not, to our knowledge, have problems with peyote-related crime or have families devastated by ayhauasca habits.

Cultures that work to find individuals a way to pursue meaningful goals in a supportive community still have members who use drugs, but far fewer who abuse them. People who have reasons not to be addicted … from work they cherish to relationships that nurture them … are less vulnerable and more able to wean themselves, while people who ultimately see nothing in their life worth stopping addiction for are far more inclined to find an addiction wherever they look. The whole point of Alcoholics Anonymous, for example, is to create a culture among members that gives them that meaningful context and personal support they need to come clean.

It’s not surprising, then, that much of the damage caused by prescription drug abuse comes first to regions of the country where large swaths of people are unemployed and underemployed – and where the new economy and social breakdown have ravaged communities.

But it’s also not surprising that this tragedy comes out of a culture that has increasingly promoted the message that there’s a pill for every problem. That message – that you can drug, drug, drug your way to happiness no matter what your issue – is toxic all by itself.

Of course we were going to become a nation of drug addicts. The very mental health professions that are supposed to be supporting people in their times of need are instead dismissing exactly the kind of personal struggles and community support that people need to develop their internal resources. Saying “there’s a pill for your problem” carries with it a message of surrender. It’s not *your* problem, so don’t bother working on your own life. It’s not *our* problem, so your community and fellow citizens can’t be bothered.

Having an insurance system that pays more for mood altering drugs than it does for therapy is a white flag. Promoting medication as a first-response to psychological problems is a white flag. Of course people are going to become addicted to medication: we’re telling them it’s their best option.

That message is every bit as pernicious as pills put in the wrong hands. Both need to stop.