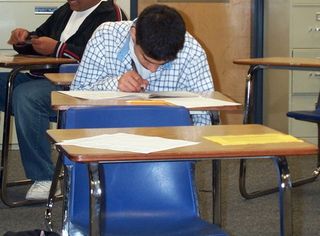 There are a lot of things kids can do to get in trouble in school, and being more creative than the test they’re taking may be near the top of the list.

Overwhelmed teachers say they’re having trouble finding the time to work with creative students, and an increasingly tight regimen of standardized tests means that creativity is often punished on report cards.

Theoretically, creativity tests should suffer from the same problem of false inflation – which makes the recent drop in creativity scores all the more disturbing.

How disturbing?  Newsweek calls it a “Crisis in creativity,” and points out that in a global economy based on innovation, a loss in creativity is an economic disaster waiting to happen.

“A recent IBM poll of 1,500 CEOs identified creativity as the No. 1 “leadership competency” of the future. Yet it’s not just about sustaining our nation’s economic growth. All around us are matters of national and international importance that are crying out for creative solutions, from saving the Gulf of Mexico to bringing peace to Afghanistan to delivering health care. Such solutions emerge from a healthy marketplace of ideas, sustained by a populace constantly contributing original ideas and receptive to the ideas of others.”

According to Steve Pritzker, who chairs the Creativity Studies program at Saybrook’s Graduate College of Psychology and Humanistic Studies, the system almost seems designed to punish creative children.  “Creative children are often treated as outcasts in the classroom, and seen as ‘problem children.’  In that environment they’re not just missing the encouragement they need, they’re actively discouraged from using their gifts, and the result is that a lot of very talented kids don’t succeed at school.”

Pritzker is a member of the American Psychological Association’s coalition for education, and is specifically working with them to develop ways to support creative children in the classroom.  While Pritzker’s grateful to Newsweek for writing about the problem supporting creativity in American schools, he says it’s been a long time coming.

“We’ve had this issue for years, but it was masked by the fact that the country was doing so well,” he says.  “Now that the rest of the world is catching up quickly, we suddenly see it as a crisis.  If that gets it attention, okay.  The problem is real.”

The good news is that attention is starting to translate to action:  At the last meeting of the APA’s education coalition in Washington Pritzker was encouraged to develop an online module on creativity for teachers that can be shared through the APA website.

That module, he says, will offer teachers information on how to understand creativity and encourage it in the classroom (including in their own lessons), and how to support creative children directly.

“This isn’t a new direction for research:  we know how to support creative kids,” Pritzker says.  “The trouble is that right now we’re emphasizing teaching to the test, and we can do better.  Hopefully we can help teachers recognize and deal with creative kids.”

Ruth Richards, a Saybrook faculty member and one of the world’s leading experts on creativity research, agrees that there’s a lot more schools can do – but says society can change its priorities as well.

“We tend to think of creativity as being for artists and for famous people,” Richards says.  “That’s not helpful.”  Instead, recognizing “everyday creativity” in children and adults alike can make a difference –especially given the impact that engaging in creative acts of any kind can have on health and wellbeing.

That’s one of the things Pritzker is hoping to get across.

“A lot of the attention on creativity in the classroom is for the economic benefits of creativity, I know, and if that’s what it takes to get attention, then fine,” he says.  “But we should also want our population to be fulfilled, and feel good about what they do, and our society to be more creative generally.  These are good things in themselves.”