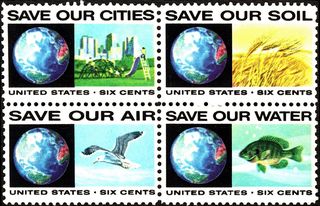 Environmentalists:  stand up and take a bow.  The surest sign that a green revolution is catching on is that, love it or hate it, everybody knows what a “carbon footprint” is.

But now that a green revolution has started, what does it take for it to come to fruition?

Some excellent suggestions have been made for ways to help businesses adjust to environmental programs;  to use local action as a springboard for global change;  to green our supply chains;  and how to talk about sustainability to non-environmentalists.  New models of leadership have been proposed.  These are practical and helpful:  but so far, we’re all still “raising awareness,” not changing society’s paradigm.  How do we take the green revolution from making people aware of their carbon footprint to getting them to take it as seriously as they do their gas mileage?

Based on the evidence I’ve seen, keep on doing what we’re doing:  progress is never as fast as we want, but the environmental movement has all the signs of a movement that really is spreading its influence.

In his book The Tipping Point, Malcolm Gladwell speaks to the patterns, influential factors, and key people that are pivotal in helping paradigm shifts in society. Through analyzing and researching epidemics in the United States, Gladwell has discovered three types of people and three key factors that are essential to the onset of a positive epidemic, such as a green revolution.

These three people are known as: connectors, mavens, and salesman. The three factors are:  the law of the few, the stickiness factor, and the power of context.

Connectors, the first necessity, are people who have ties in many different groups within society and are able to act as a channel between groups. Mavens, the second important type of people in an epidemic, are defined as people who have strong desires to help others make informed and wise decisions. Salesman, the most persuasive of the bunch, typically have convincing and charismatic personalities and are able to influence the buying decisions and opinions of others.

So, it would seem, according to Gladwell, that the green revolution is catching on because key people, such as Connectors, Mavens and Salesmen, as they advocating around the planet for the planet.

And – equally as important – the stickiness factor, the power of context and the law of the few are helping steer the revolution. So, what do these involve?

The stickiness factor has to do with the popularity of an idea or possession and the ability of it to “stick” in people’s minds. At its core, the stickiness factor is the quality of a product or concept that compels a person to remain attentive and curious to it.

Essentially, the stickiness factor would help the idea of a green revolution to “stick” in people’s minds as a “noble and virtuous cause” effecting buying and consumption habits.

The second key factor steering the green revolution, the power of context, is the most obvious and easily understood of the factors. It involves the environmental conditions and timing that an idea or product is introduced into society. This is the most important of the three factors in that the timing and environment of a product or idea will determine if it “tips” into widespread popularity, thus creating an epidemic. And, it would seem, according to Gladwell, that the green revolution has “tipped” into popularity by way of its timing with various environmental “scares” including water shortages, power outages, and pollution severely effecting public health.

Lastly, the law of the few, involves Connectors, Mavens, and Salesman working together toward the common purpose—a green revolution. Typically, this occurs at high levels—such as governments, corporations or media where people’s opinions are affected and formed.

According to Gladwell’s research—it is quite likely that the green revolution will “stick” based on the context and importance of mother earth in lives across the world. Creating a lasting paradigm by way of transforming our lives—our habits toward mother earth—is paramount. Indeed the lives of generations to come depend on it.