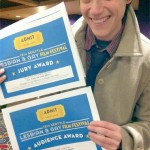 Put This On The (Map) is a new documentary training film that features 26 young people from East King County re-teaching traditional notions of gender and sexuality. The film was co-produced/directed by Megan Kennedy (LIOS 2004) and Sid Jordan Peterson (University of Victoria – 2004). Kennedy is the Outreach Supervisor at Youth Eastside Services where she provides individual and group counseling for gay, lesbian, bisexual, trans, queer/questioning youth. Peterson was the Director of the Kirkland Teen Union Building in 2008, when Kennedy and Peterson embarked collaboratively on their mission to create a local community where all people have the opportunity of success regardless of their sexuality and gender.

Put This On The (Map) documents young people who challenge their suburban community to do more than sweep their existence under the rug. Fed up with a lack of queer visibility, youth provide an honest evaluation of their schools and families. Professing expertise over their own lives – from getting beat-up in a schoolyard to being picked up as a runaway – we learn that queer youth in the suburbs exercise courage daily.

Personal accounts of experiencing depression, isolation, and violence are woven together with optimistic portraits of fearlessness and liberation. Queerness comes to be defined as one part of a whole identity, as youth “come out” as not just queer, but also as writers, photographers, activists, and much more. Put This On The (Map) is unpretentious in its call to action, yet decisively instructive for improving schools and communities for all young people.

Elected officials, families, teachers, providers, and community members are calling the project “brave” “effective” and “crucial.” Participants are calling the project “awesome” and “life changing,” while other young people asked about how to get involved in the next project. Put This On The (Map) is building capacity and competency across our state as workshops are offered led by youth/adult training teams within agencies, organizations, provider networks and schools.

For more information visit www.putthisonthemap.org or contact [email protected]. Put This On The (Map) will be screened at the San Francisco International LGBTQ Film Festival, June 25, 2010 at the Roxie Theater.