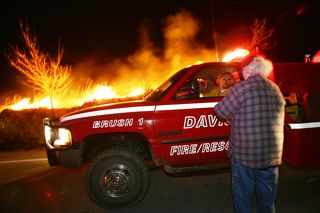 Sometimes the hardest part of an emergency is knowing where to turn. When something goes wrong, what do you do? Calling “911” is an option that most of us know by rote, and it’s a great choice – help is often just a phone call away.

But the 911 system, like most of our Emergency Management (EM) systems, was designed for the analog age, and according to a recent article in governing magazine, emergency services organizations around the country are asking if the social networking tools of the digital age might set the next standard for emergency communication in the 21st century.

According to the article:

It’s been almost a decade since 9/11, but our multi-billion-dollar efforts to improve public safety departments’ communication have yielded very few results. In fact, during the 2005 Hurricane Katrina relief work, some emergency personnel had to resort to communicating by running handwritten notes back and forth. While the feds continue to try and figure out a way to utilize public safety radio for emergencies, some states and localities have come up with solutions of their own.

Saybrook Organizational Systems alumnus David Williams, PhD is a leading consultant to emergency service organizations and health care systems around the globe. He was also responsible for publishing the leading comparative data survey of the nation’s largest EMS services, and helped design and develop the national EMS conference for operational leaders.

From this vantage point, Williams says that what’s most noticeable about social media and is not that it’s replacing traditional forms of EMS service …. you still want to call 911 … but how effectively it’s doing what social media is supposed to do:  better connecting one group of people, like emergency service providers, with the people they want to stay in touch with … the public and their patients.

“What I’m starting to see is a lot of usage, especially in public safety, of Twitter and Facebook, for communicating news with people, rather than in emergencies specifically” he says. “The City of New York’s fire department has a Twitter account and they will tweet out everything from accidents that are holding out traffic to the fact that they’re filming a movie that will have explosions in Manhattan.  Homeland security at the federal level and local level are using it to broadcast out information.  I get updates on the city of Austin’s emergency management Twitter feeds, so I get updates about the shooting that happened near the University of Texa at Austin and the fact that they’re still looking for an assailant.

“It’s happening more and more,” he adds, “and it’s really neat to see departments and agencies use it as a broadcast forum.”

Equally important is another, more behind the scenes, impact: social media technologies are allowing public safety departments from across the country to communicate with each other, sharing best practices, new techniques, and finding solutions to common problems.

“Sharing ideas is actually a problem for public safety, that in general most people are home grown, they work someplace for a few years, they get to someplace where they’re going to have their career, and they never leave, so they’re not exposed to a lot of things,” Williams says. “Now old school social media – Yahoo groups – have agencies discuss topics that are important to them and get input from agencies of all shapes and sizes across the country.  Now with Twitter and Facebook they can also follow what’s going on in a broader scope.  There’s a much broader connection to the world – which is something that I had actually pointed out was a problem in my Saybrook dissertation: people were not exposed to each other outside of their environment.”

At the same time, social media presents EMS services with problems they’d never considered before. The biggest one so far, Williams says, is a concern to everyone who’s ever posted a picture:  privacy.

“There are people who take pictures of everything that happens to them and put it online,” says Williams. “That becomes an issue if an emergency worker does it, because there are patient and confidentiality issues. If an ambulance provider takes a picture of an accident and posts it on Facebook, they’ve broken the law because they’ve compromised the patient’s medical privacy. But EMS caregivers are workers, and it’s hard to regulate people from not being on Facebook at work. Systems everywhere are asking what kind of policies we need to put in place:  what’s sensible?”

That’s a question no workplace has a clear answer to. But the fact that emergency services are struggling with the same workplace problems as The Gap doesn’t change the high stakes nature of their business:  the connections created by social media in the EMS field really could save lives.