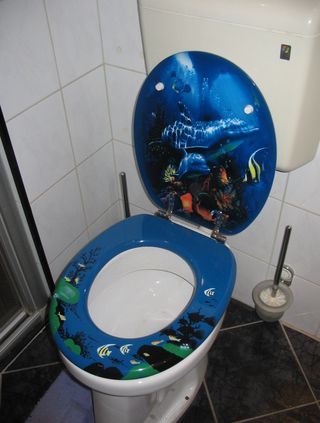 Be honest:  did YOU celebrate World Toilet Day on Nov. 19?

This may be something that is off your radar, but there are billions of people without safe and clean toilets. Toilets are a bit of a taboo and ewwwww subject … but this is a serious and dangerous issue that is linked to millions of deaths every year.  Worlwide Diarrhea is the second biggest killer of children under the age of five:  providing children access to sanitary, safe, facilities reduces such deaths by 40 percent.

Many of us have access to our toilets day and night, and we can go outside of our homes and will be able to enjoy the luxury of finding a toilet when we need one. We can stroll into our local grocery store and expect to see a bathroom that is at least somewhat clean.

Now just imagine waking up in the middle of the night where there is no toilet, and that you have to brave the darkness of a mud filled, dank and terrifying walk through narrow passageways to a public latrine that is just a hole in the ground. Your greatest danger may not be just the long list of potential diseases – if you are a woman, your greatest danger is the threat of being raped on your way to or while you are using this hole in the ground.

According to the World Toilet Day website there are 2.6 billion people on the planet without access to proper sanitation. They use the bathroom wherever possible, outdoors in open fields, behind bushes and buildings and even into plastic trash bags.

Flying toilets are prevalent in the shanty towns all over the world; this is plastic trash bags that are filled with feces that are shared/tossed from house to house or in most cases – mother to mother as a way to allow women and girls to use the bathroom in the safety of their housing.

Amnesty International recently completed a report Insecurity and Indignity: Women’s Experiences in the slums of Nairobi Kenya in 2009. Women interviewed by Amnesty International spoke about the risks that they take everyday if they decide to take the 100 – 300 meter walk to a communal toilet. The risks of being sexually assaulted far outweigh the risks of being mugged or robbed. More toilets in these areas can help millions of women and girls to be safe in their own communities.

Better sanitation leads to less disease; less sickness will allow more children to attend school and more adults working or actively seeking work where available. As we can see from the stories coming out of Haiti, Kenya, and Bangladesh, decrepit and nonexistent sanitary systems led to severe hardship.

Another statistic: “for every $1 invested in sanitation and water, $8 is returned in increased productivity.”

Disease outbreaks can undermine social and economic development. In Haiti, cholera has swept over the shanty towns that were meant to be temporary homes but it seems they will be permanent housing for the people and unfortunately disease. It is estimated the Ministry of Health has reported 1,186 deaths and 19,646 cases of illness from cholera. The outbreak has ignited the anger and anguish of those that live in the shanty towns and this has jeopardized the upcoming elections that could be pivotal to Haiti’s return. This is just one example, but it shows that the economic and social impact of disease can lead to a level of chaos that will reach beyond a country’s borders. Poverty and illness are the feeding ground for angry and violent uprising that may help destroy fragile democratically based governments and breed corrupt and oppressive regimes. A weak “people” cannot fight against injustice.

It may not be as simple as adding toilets to a slum or refugee camp. But the lack of clean water and sanitation can affect people mind, body and spirit:

This is a social justice issue that affects the emotional and physical well being of millions of people in the world.

The combined efforts of multiple NGO groups along with local action is the first step for treating what has become a social and health epidemic. Sustainable Organic Integrated Livelihoods (SOIL) was already at ground zero in Haiti prior to the earthquake and they along with other NGO’s , Oxfam for example, recognized the impending danger of epidemic level outbreaks of disease in countries where water sanitation and toilets were not accessible or even existent in poor communities.

The work to “clean” up our living experience on this earth is a joint effort by nations and individuals. Everyone can take a step by sharing the knowledge and even participating in social and environmental action for to increase well being across the nations. Despite World Toilet Day having passed, there is always a need everyday and every moment.