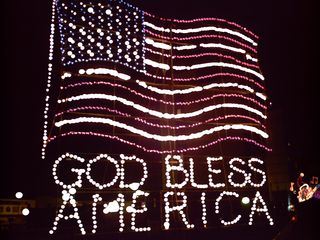 Do you love your country?  Does it matter?

A new survey shows that – depending on who you are and where you live – national pride can have a definite impact on happiness.

Mike Morrison, Louis Tay and Ed Diener predicted that even when people fall into hard times, even when we don’t have enough money or food, they can find consolation in personal pride for their nations.

To find out they interviewed 132,516 individuals from 128 countries via telephone and in-person, who completed multiple surveys on life satisfaction, national satisfaction, domain (standard of living, personal health and job), residential mobility (are they planning on moving) and environmental variables (do you have electricity, telephone, television). All of these surveys were compiled to get a sense of an individuals’ Subjective Well Being (SWB).

More specifically, they saw that a connection between national satisfaction and life satisfaction was strongest with people who lived in the poorest countries of the world, those with the least amount of money, and those with the fewest household conveniences.

This, however, is unique to people who are part of non-western nations that have a less individualistic view of life. In many cases the viewpoint of people in western nations is much more stronglyy related to achieving individually through having … to be blunt about it … possessions.

“For those for whom the possessions of material objects weighs more heavily,” they wrote “standard of living plays a stronger role in life satisfaction,” For the poor in less individualistic cultures, on the other hand, well being is still more connected to the overall well being of society or a nation.

But we can still see the affect in our own lives.  Think about the United States around just after the 2008 election. President Obama pulled together millions of people across cultures, socio-economic class, genders, and even languages because he did something that the authors of this research suggests boosts individual subjective well being. It seemed that he made a lot of people feel good about being an American, and this boosted their happiness even if they didn’t have a job or just lost their homes to foreclosure.

These findings may put a tiny little dent in the early and highly regarded framework of Maslow’s hierarchy of needs. The assumption here is that if your basic needs are not met (i.e. food, shelter) then you cannot go on up the Maslow Hierarchy pyramid towards life satisfaction and well being. But, this research is pointing to a possibility that many people, despite not having their basic needs met, can derive well being from feeling like they are a part of greater whole, their nation, and if their nation is “feeling good” then they are as well.

Bringing people together to champion the well being of a nation through programs, pledges or even having leaders connect with the people may be the first small step towards national and personal well being for all.