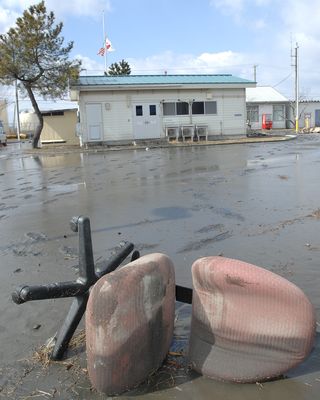 We’re witnessing another devastating natural disaster. We’ve been through this at lot recently, New Zealand, Haiti, now Japan … one of the things they have in common, aside from human suffering, is our inability as bystanders to turn away.

There are endless news stories about the devastation, loss and pain that millions are experiencing right now.  There are 20,800 YouTube videos of Japanese buildings falling down; a Google image search produced millions of images of the devastation including any and all news related to the event.

While people have always be aware of the dangers in the world, the hyper connectivity and broadcasting of disasters such as these can make us feel even more vulnerable. What is the impact of being a witness, even a distant witness, on our own psyche, on our desire to help?

There has not been a significant amount of “empirical” research on the effects on watching endless images of disasters. What little there is focuses on the September 11th terrorist attacks and the Oklahoma City Bombing.

The Dart Center for Journalism and Trauma put together a fact sheet on the media coverage of trauma and its potential affect on adults.

The most prominent impact of endless news images was on those directly impacted by the event: seeing it happen over and over on cable news brought on symptoms PTSD and depression while they watched or viewed photos of the disaster.

But adults who were not directly exposed to the event also sometimes suffered from symptoms of anxiety and distress. Further research showed that there was a strong connection between viewing the event live on television, like many of us did on 9/11, and symptoms of PTSD.

PTSD need not be a long-term outcome. Many people are resilient in a way that witnessing such trauma and loss will have only a short term or slight effect on their psyche.

But for others PTSD can be an outcome, as can vicarious grief.  An article written by R. Scott Sullender and published in the June 2009 online edition of Pastoral Counseling takes a step to suggest that we can experience a level of collective grief during these times.

Sullender refers to a definition of vicarious bereavement by Dr. Therese Rando:  suffering from a level of sadness and grief even though there isn’t a direct connection with those that have died.

That’s easy to imagine after witnessing the recent earthquake disasters, even from 5000 miles away. With the expansion of media across the world, we are able to see what it happening nearly anywhere a camera can reach in the world. This has expanded our sense of community and connections to others who we may not personally know. Sullender argues that this connection creates an attachment, and where there is attachment there is grief when that connection is lost.

The miraculous thing about the recent advent of 24/7 human connection on this earth is the fact that we are now more aware of each other and aware of each others’ needs, whether near or far. This connection through vicarious trauma and grief may lead to reaching out to help in times of needs.

But do we need to watch suffering 24/7? Probably not. The best option may be take care of ourselves while working through any distress or grief that may come up while witnessing the disasters. It may be in our best interest to take a break every once in a while.

Take pause for yourself then for others.