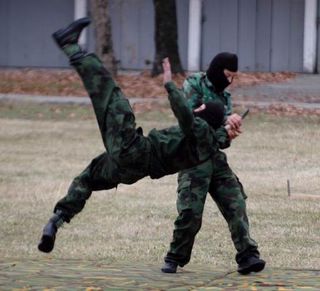 “Money is the root of all evil”

Well not exactly. The actual quote is “For the love of money is the root of all kinds of evil…” — Timothy 6:10

The world is still reeling from the disastrous collapse of worldwide financial markets all fueled by that toxic love for money. A lot has been written over the centuries about the problems of desire, greed, and evil;  and you’d think that with all the knowledge of history to draw upon, we’d know that it’s not a good idea to put others in harm’s way for profit.

Sadly, a recent study has shown that we’re just as eager to make the same old mistakes one more time if there’s a buck in it.

At the April 2011 annual meeting of the Cognitive Neuroscience Society co-author Oriel FeldmanHall presented a study that showed that even with our best spoken intentions, sometimes we will do the very opposite, especially when it comes down to money.

Participants were initially asked if they would give another person an electric shock in order receive a cash payout. When presented with that option as a purely hypothetical situation, most people said no.

Then they were given a chance to do it for real.

Participants were placed in MRI scanner and given a choice:  they could either submit another person who was located in another room, to an electric shock and receive one British pound (about $1.50 US) or do nothing and get no cash. To make the pot even sweeter, they could administer the shock up to 20 times to build up their reward.  More pain, more gain.

96 percent of the people chose to harm another for the cash. When they saw a video of just the hand of the person reacting to the shock, they walked away with about $26 of the total $33 dollars they were eligible to get. Getting a view of both the hand and the grimaced face made most of the participants stop at $19.

The MRI allowed the researchers to see brain activity that happened when participants were presented with this moral dilemma. There was a buzz of activity in the insula. This is the part of the brain that neuroscientists believe is attached to emotions. Feldman Hall believes that the observation of this part of the brain is what is missing from previous scenario type studies such as this. Her hope is that these results will open the way for a neurological understanding of how the brain controls compassions or moral behavior.

But of greater interest to society is the fact that despite every effort made to teach morals, ethics, and compassion – despite the horror that attended earlier experiments of this kind, like the Milgram study in 1969 that found a majority of people would administer what they thought was a lethal electrical shock to a stranger if told to do so by a person in a position of authority – we’re willing to tell ourselves one thing but then throw our principles out the window when even small amounts of power and money are involved.

In an article published in the Journal of Humanistic Studies author Martino Rossi Monti draws on philosophical thought and historical events on the study of evil. He explains that nearly anyone in certain situations could cross line and be cruel to others. How can this happen even when we insist that it can never, ever happen? Monti offers that it happens because everyone can be drawn in to conform and seduced by power and force.

There is an amazing and chilling by Primo Levi in this article that sums it up well:  “Monsters exist, but they are too few in number to be truly dangerous. More dangerous are the ordinary men.”

Rollo May wanted to acknowledge that we do have the capacity harm others as much as we have the ability to do good. It’s part of the human condition, and the closer we get towards self-actualization the more capacity we have both to help and to harm. Neuroscientists like FeldmanHall are hopeful that by studying the brain we can learn how to make people more compassionate and principled. But if May is right, there are no quick fixes to the problem of human evil:  brain-oriented solutions won’t make us more compassionate, they’ll just take away our capacity to make meaningful choices (assuming they work at all).

Perhaps that is the essence of a moral problem:  it has to be solved by making the right choices, doing the hard work, and sacrificing – sometimes as little as $33.

We’d better get that work started.