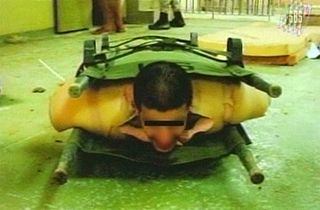 It seems like we should know what is and isn’t torture.  But do we?

Most of the debate has centered on specific techniques – sleep deprivation?  Stress positions?  Water boarding?  The endless ways we can do one another harm seem to have created an endless shade of gray, because we’ll never have a checklist big enough to cover every scenario … or exactly how they can be applied.

But what if that’s the wrong way to approach the question?  Is there a better way to determine what is and isn’t torture?

A group of researchers from multiple prestigious universities recently published their study on torture in the journal of Psychological Science. The research team demonstrated that whether or not a specific tactic that is used in an interrogation is actually considered torture is dependent upon what they refer to as the “empathy gap.”

The UN defines torture as the “infliction of severe physical or mental pain or suffering.” The research teams suggested that trying to pin that to some specific interrogation techniques and not others misses the point:  the point is, how do we tell if another human being is severely suffering, whatever we’re doing?

People who are not experiencing pain underestimate it. The researchers contend that the interrogators did not see “enhance interrogation techniques” (the Bush administration’s euphemism) as torture since they, as individuals and a collective, had never experienced or could even empathize with the suffering that this may have caused. Loewstein stated that we have difficulty understanding the pain of others if we are not in the same place or we have shared a similar experience that they may be going through at that time.  If you don’t know how much pain you’re causing, how can you determine if you’re torturing?

Denying the fact that another human being is experiencing pain without evidence or relevant experience is part of the what the researchers define as the empathy gap.

In order to demonstrate how the empathy gap distorts policy definitions of torture, the research team designed four studies that mimicked three of the common interrogations tactics, solitary confinement, exposure to extreme cold temperatures, and sleep deprivation. Of course, they did not submit participants to the same torture methods, but the used more mild versions. Even with just a mild exposure to the physical and psychological pain, participants regarded the pain that they went through as torture immediately after they’d been through it.

But disturbingly they found that even 10 minutes after experiencing a mild exposure to pain, some participants had forgotten or emotionally distanced themselves from that pain, and changed their mind about the idea that what they had experienced was torture.

That lack of empathy has made torture “justifiable” all over the world.

Amnesty international released a report in 2004 that chronicled the use of torture in 39 countries. As part of their action campaign they asked people to take their Torture Test, a web based true false test asking us some of the hard questions about the use of torture.

Take the test and how your current thinking around what is torture or not is in-line with the results of the Lowestein study.

The empathic connection that we are capable of having with one other is key to this issue. Being able to understand how pain feels to ourselves and connect this to how it impacts others is what makes us humane. Clearly the people who keep themselves the most distant and detached … such as a policy maker or professional interrogator … are the people least able to understand if someone is being tortured.

Lowestein’s study shows that without that emotional and even intellectual empathic connection to the suffering of others policy makers cannot even state with certainty what is and what isn’t torture. It has often been shown that torture is not effective.  It’s ridiculous that we still have to prove that torture is, in fact, torture.