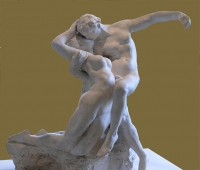 Of all the emotions, love is surely the most talked about – and the hardest to explain.

Unless you’re a neurologist, that is:  January saw several publications claiming that love was entirely explainable by neurochemical reactions.

“Love:  Neuroscience reveals all,” reads a headline in the journal Nature’s Jan. 8 issue.  You don’t need flowers:  the article promises to “reduce love to its component parts,” none of which is … well … “loving” somebody.

A New York Times science blog took the idea a step further, suggesting that an “anti-love drug” is around the corner – and that by inoculating teens and others against love during sensitive times of their lives, we can prevent a lot of bad decisions.

“Such a vaccine,” it notes (with a straight face), “has already been demonstrated in prairie voles.”

Stanley Krippner doesn’t know much about prairie voles, but he does have considerable expertise in both neuropsychology and the psychology of human sexuality.  A psychology faculty member at Saybrook, he says the problem with these articles isn’t so much the research – which he thinks is great – but the broad claims made on its behalf.

“The article speculates that biologists ‘may soon be able to reduce certain mental states….’ I object to the word “reduce” and would prefer ‘describe,’” Krippner says. “There is nothing simple about neuroscience and biochemistry, and to claim that they ‘reduce’ human experience and behavior is making an unfounded assumption.”

That’s just the beginning of the assumptions made by those who want to “reduce” love to a neurochemical state, Krippner says.  Another big one is that “love” is a single state.  It isn’t:  in fact, previous scholarship is clear that it’s a whole range of experiences, each complex in its own way.

“The headline is ‘neuroscience reveals all,’ but the research only focuses on certain aspects of love,” Krippner begins.  “According to Robert Sternberg, a former president of the American Psychological Association, love has three major components:  passion, intimacy, and commitment, and I suspect that each of these has its own neurological and biochemical markers. In addition, the essayist C.S. Lewis described four types of love:  Eros, Philia, Agape, and Storge (i.e., erotic, brotherly/sisterly, spiritual, neighborly). In my own research, I have added several more (playful love, parental love, self love, etc.). Each of these involves a mixture of passion, intimacy, and commitment, and there are cultural and individual differences as well.”

Krippner isn’t writing off the biological components of love at all. He stresses that it is important.  “Genetics probably plays a key role in determining how any given individual’s ‘love map’ will be charted; for example, people who inherit an abundance of mirror neurons may have an inbuilt capacity for empathy that many of their peers might lack,” he says.  “However, genes find their expression through what environmental circumstances make available; hence a “systems paradigm” to understanding love is mandatory. And a systems approach implies depending not only on brain and biochemical research, but phenomenological research, field research (to detect cultural variations), and even participant observation research. Indeed, some researchers would prefer the latter research method to scanning the brain and body–and might end up learning more about sex and bonding than their laboratory-bound colleagues!“

That sounds like a lot more fun than doping prairie voles.   But what about an “anti-love” drug?  Is that really possible?

No, Krippner says – at least, not the way it’s being promoted.

“I do think a chemical compound could affect ‘limerance,’ which is the feeling of having a ‘crush’ on someone,” Krippner says.  “But ‘love’ is much more than limerance – they’re very different experiences.”

Which is to say, there may be no impersonal way to understand a personal bond.