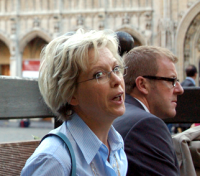 Let’s admit it: we’ve all had some really bad impulses.

Shouting at a lecturer, running in traffic, stealing an inadvisable kiss … who hasn’t had a sudden, mad, urge to do the unthinkable?

It’s a basic fact of human life, and once again evolutionary psychology is claiming to have explained it.  Turns out, it’s a survival mechanism.  Who would have guessed?

In a recent paper published in Science, Harvard researches say these urges are “ironic processes of control” that help us tame our anti-social impulses.

“These monitoring processes keep us watchful for errors of thought, speech, and action and enable us to avoid the worst thing in most situations,” the authors write.

In a post on the New York Times’ “Mind” blog, author Benedict Carey expanded on the idea that these self-destructive impulses evolved as a way of helping us manage our anti-social tendencies.

Perverse impulses seem to arise when people focus intensely on avoiding specific errors or taboos. The theory is straightforward: to avoid blurting out that a colleague is a raging hypocrite, the brain must first imagine just that; the very presence of that catastrophic insult, in turn, increases the odds that the brain will spit it out.

“We know that what’s accessible in our minds can exert an influence on judgment and behavior simply because it’s there, it’s floating on the surface of consciousness,” said Jamie Arndt, a psychologist at the University of Missouri.

So there you go, question answered, problem solved, right?

Maybe – unless you actually want to actually understand what’s going on in your mind, with your thoughts, and your impulses.  Then this theory has absolutely nothing to tell you.

In fact, says Saybrook faculty member Kirk Schneider, it’s a classic example of what Rollo May, in his book Psychology and the Human Dilemma, called “turning mountains into mole hills.”

“The implication of this article that much of this is just ‘error’ or ‘white noise’ of the brain interfering with sound social judgment strikes me as simplistic and naïve,” Schneider says.  While surely not every stray thought “means” something on its own terms, is it really reasonable to say that none of them do?

“While it may be true (for some at some points) that an attempt to avoid a behavior engages naturalistic brain mechanisms that highlight and express it, this illuminates next to nothing about the subtle and elusive motivations that may underlie such mechanisms, such as personal ambivalence, cultural or political circumstances, and so on,” Schneider says.

Not every stray thought or sudden impulse is the same as every other – and to really understand them, Schneider suggests, one should probe deeper and ask more questions.

“For example nowhere in the article is the question asked about the subjective state of the person experiencing contradictory impulses, or the social settings in which they manifest; all we get presumably is the reflexive and measurable neurology,” Schneider says.

The idea is that by their MRI scans shall ‘ye know them.  Yet none of us, when we’ve had such an experience, have ever wondered:  “What are my neurons doing?”  We’ve wondered “What am I thinking,” and … sometimes … asked “how do I really feel? What do I really want to do?”

Those expansive questions, says Schneider, are far more relevant than the reductive answers provided by the current study.

“In short,” Schneider says, “this article reflects what we see all too often today – a mechanized ‘answer,’ derived from a linear question in response to a complex, subtly nuanced, and intimate problem.”

Really, that’s no answer at all.