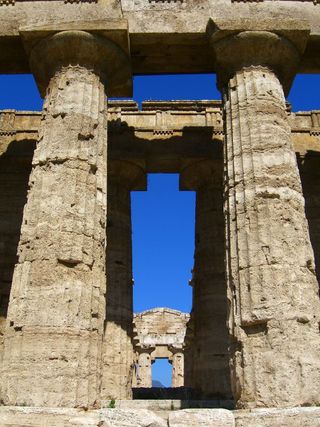 The story I got in high school is that agriculture was the magic potion that eventually turned “cave men” into “urban man.”  We got together and created a civilization because we wanted to eat.

The needs of our new farms with their domesticated animals and seasonal crops kept pushing us to bigger and bigger feats of civilization:  the idea is that a culture evolves on its stomach.

But an article in National Geographic says maybe the high school text books got it wrong. It’s not “food” – it’s “spirituality.”

The oldest human architectural structure ever discovered – over 11 thousand years old – turns out to be a temple — and it turns out that our ancestors were building temples before they were making farms.

At a time when human beings were living in nomadic tribes, they were also carving massive stone pillars to provide a better place to worship.

Was it our sense of the sacred – and our need to relate to an awe-inspiring universe – that really inspired civilization?

According to National Geographic, many archeologists say the evidence suggests that’s the case.

“Twenty years ago everyone believed civilization was driven by ecological forces,” Schmidt says. “I think what we are learning is that civilization is a product of the human mind.”

What do you think?  Where does civilization come from?  Is its critical ingredient food or wonder?  Leave a comment below for future generations to discover.