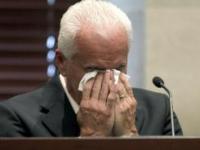 OK, I’ll admit it: I’ve been following the Casey Anthony trial for the past 32 days on both Court TV and HLN.

I don’t veg out on the couch all day, eat potato chips, and let the trial proceedings numb my brain, but I have kept the TV on during the trial every so often while I work at my freelance writing, catching snippets of testimony here and there. I’ve also watched the post-trial day wrap-ups on all the HLN shows—from Jane Velez-Mitchell to Dr. Drew to Nancy Grace.

It’s a tough case to ignore. As I type this post this morning, George Anthony’s alleged mistress is being grilled on the stand by state prosecutors. I can only liken this vicarious experience to watching a series of car crashes over and over and over again—each crash more gruesome than the previous. The story itself just keeps you watching.

For those who’ve been lucky enough to sidestep the drama of this ongoing court case, I’ll briefly fill you in on the story. The case focuses on 25-year-old mother, Casey Anthony, who stands accused of murdering her 2-year-old toddler, Caylee. State prosecutors contend that Anthony sedated Caylee with chloroform before placing duct tape over the toddler’s nose and mouth so she’d suffocate to death. The motive? Release from the shackles of parental responsibility, according to state prosecutors.

No one could account for the toddler in 31 days from June 16 to July 15, 2008—a timeframe that, state prosecutors say, gave Anthony the freedom to spend ample time with her then-boyfriend, go to night clubs, participate in hot body contests, and get a tattoo on her back that reads bella vita (or “beautiful life” in Italian). As the days passed, Casey Anthony protected her renewed party girl lifestyle, according to state prosecutors, by weaving a web of fictional storylines involving an imaginary nanny and an array of other made-up characters. These storylines, prosecutors argue, were spun to keep her concerned parents, George and Cindy Anthony, as well as her brother, Lee Anthony, at bay over Caylee’s absence.

Three years after Caylee’s death and the Anthony family’s descent into hell—a hell laced with salacious accusations of sexual abuse, a suicide attempt by George Anthony, court hearings, depositions, and play-by-play media blitzes on all the cable news channels—George and Cindy Anthony now face the possibility of losing their daughter—a woman who’s failed to visibly show any signs of sincere grief over the loss of her child—to lethal injection if she’s found guilty of murder.

While most of us follow the case from home (or work if we can sneak in time for it), there’ve been more fervant types who’ve made pilgrimmages to the Orlando courthouse and braved long lines, stampedes, and fist fights for an audience seat inside the court room.

Court TV and HLN are cashing in on this operatic trial, which is produced, filmed, and bankrolled by the state of Florida and its taxpayers.

According to an article in The Hollywood Reporter, the Casey Anthony trial “has propelled HLN to its highest-rated month ever, topping MSNBC in primetime and total day [viewership] for the month of June and even beating out perennial cable news leader Fox News in the 3 p.m. and 4 p.m. hours when trial testimony was at its height.”

Thanks to the Casey Anthony trial, HLN has been raking in an estimated 982,000 total viewers daily, according to the article. Of that number, 292,000 viewers are between the ages of 25 and 54… and yes, I’m in that pool of watchers.

During the past four weeks, former prosecutor turned TV host Nancy Grace—who labeled Casey Anthony “tot mom” when she first began discussing the case on her HLN primetime show in 2008—has seen her show’s ratings skyrocket by more than 80 percent to 1.5 million total viewers, according to the article.

Chaos. Drama. Raw emotion. Leaps of logic. Conspiracy theories. Those are just some words and phrases that I think best describe the dark cloud of confusion surrounding this case. It’s this dark cloud that keeps cable media and viewers coming back for more trying to make sense of a nonsensical action: The murder of a 2-year-old girl.

From a systems perspective, the case itself has got it all: accumulators, behavior-over-time diagrams, causal loop diagrams, escalation, feedback, shifting the burden, snowball effects, vicious cycles, and, above all, reinforcing loops.

Cable news media created its own reinforcing loop around the case from the get-go by making viewers feel like they are part of the case and should have a say in the life of a family they’ve never met as well as the horrible circumstances they’ve had to face. Calling an HLN show to opine is one thing. Showing up at the Anthony family’s home to rummage through their garbage and conduct an independent investigation is another—yes, folks, this happened when Nancy Grace first started covering the case in 2008.

From a social perspective, media coverage of the Casey Anthony trial is voyeurism on steriods.

From a systems perspective, the media coverage has created a reinforcing loop wound so tight that, to quote systems thinker Donella H. Meadows’ book Thinking in Systems: A Primer, “the more it works, the more it gains power to work some more, driving system behavior in one direction.” Like increasing ratings and viewership, perhaps?

If I spend the day following the Casey Anthony trial, I feel exhausted. It’s the same feeling of exhaustion I would get whenever I covered high-profile cases for several days as a newspaper crime reporter. Reinforcing loops created by the 24-7 media cycle tend to cause that feeling.

Unbeknownst to the media, all reinforcing loops ultimately destroy themselves, according to Meadows. Like all high-profile cases of the past, the Casey Anthony story will eventually draw to a close.

For trial viewers, I think the cycle may break when the case reaches the most critical point: Closure. Closure that may or may not bring justice for Caylee.

We’ll have to stay tuned to find out.