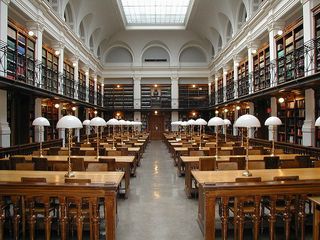 In a recent essay for The New Yorker, Louis Menard recalls the first time a student ever asked him “Why did we have to read this book?”  It’s the more direct way of asking:  what is this education good for?

It was, apparently, the first time he’d ever thought of the question himself.

I could see that this was not only a perfectly legitimate question; it was a very interesting question. The students were asking me to justify the return on investment in a college education. I just had never been called upon to think about this before. It wasn’t part of my training. We took the value of the business we were in for granted.

The answer, he decided, depends on what college is for – and nobody’s really sure of that, anymore, are they?

On the other side of the Atlantic, Britain’s AC Grayling has just opened a “New College of the Humanities,” explicitely pitching a humanities education as a middle-class luxury good.

“He has cartooned it as no longer an academic community but a high-end luxury consumable for the middle classes, operating roughly half a year, with dons coming and going at will, handing down wisdom in between television and book tours,” writes Simon Jenkins.  “It covers the unpleasant truth that universities are a benefit chiefly to the present and future middle classes.”

Ouch.  But even if that’s true, what benefit are “the present and future middle classes” getting from a college educaiton if we’re not sure what it’s for anyway?  Is it training for life in a democratic society?  A way to earn a union card in the middle class?  A way to produce better citizens?

At the Rethinking Complexity blog, Dennis Jaffee has been following the new rules for higher education set down by the U.S. Department of Education.  Going over some of the recent powerful educational experiences he’s had, he suggestes what a 21st century college needs to do.

What do you think?  What is college for in the 21st century, and what does someone need to know to consider themselves “educated?”

Leave your thoughts in the comments section below.