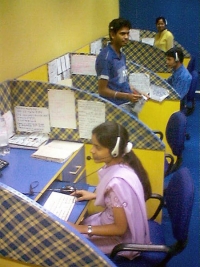 Never before in history have people lived and worked the way they do. Because call center companies don’t trust India’s infrastructure, they operate in walled cities of their own (“cities made by corporations, for corporations,” the article calls them). Their employees leave not just their homes when they go to work, but their entire country. They are forbidden to leave until their shifts are over.

If they’re in a geographic bubble, they’re also in a temporal one: because they’re supposed to be working in the time zone foreign cultures, they frequently work night and graveyard shifts, further isolating them from the place and culture they actually live in.

They are trained (“brainwashed,” one long-time employee suggests) to remove all traces of their native culture. Their accent, their references, their idioms, their language (in many call centers, speaking a language other than English is a fireable offence). The names. (Unless, of course, their names are already Western). For all their working ours, their nationality and culture must be a cipher: impossible to tell.

“The most marketable skill in India today,” the Guardian wrote in 2003, “is the ability to abandon your identity and slip into someone else’s.”

Such “training” is only so effective, of course: no one really forgets who they are. But it does cause, in the words of the article, an “identity crisis.” The better one is at this job, the less one fits in anywhere.

Call center employees the author meets talk about experiencing depression, disorientation, and a sense of futility.

These, of course, are signs of “mental illness,” but not the kind of “mental illness” that is compatible with the medical model of treatment. Does it make any sense at all to think that call center employees who feel a sense of emptiness working in a place that strips their identities away are suffering from a neurological condition?

But then, the neurological links to much mental illness have always been suspect – and the manifestations of mental illness have always had more to do with culture than brains. It’s worth remembering that from eating disorders to schizophrenia, individuals across cultures have displayed widely varying symptoms and manifestations … until they were exposed to a dominant western culture. Then, and only them, did symptoms begin appearing in China, Japan, and Africa that came out of the DSM. (The article to read is “The Americanization of Mental Illness” from the New York Times magazine).

What we already knew, if we cared to look, was that much of the mental distress people experience has nothing to do with their brains and everything to do with their circumstances: trying to navigate their way through a culture that is often toxic can … will … must … have an affect on the mental lives of the people doing so. These are existential issues, not biochemical ones: therapy can address it. Pills, at best, can only cover it up.

But what we’re seeing in the Indian call centers is a new culture, a culture (the article notes) that is international enough to be no culture at all.

That culture, naturally, will create its own forms of distress – it may be one of the most inhospitable cultures to a healthy mental life ever created – and it’s spreading. As the globe gets more connected, as an unsleeping capitalism ties time zones together and breaks through cultural traditions that are inconvenient to business, we are all going to have to live, at least in part, in the culture of no culture.

That’s a profound existential conundrum, coming to an office park near us.