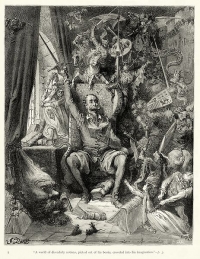 In an extraordinary article in Poetry Magazine, poet Joshua Mehigan examines the popular link between “poetry” and “madness.”  After all, aren’t poets visionaries and eccentrics?  Aren’t they taken over by the muse and privy to the depths of the human experience?

Well, maybe those last two.  But in general what he finds is that, popular opinion to the contrary, there actually isn’t much of a link between poetry and madness.  On the contrary:  “When Lear is mad,” he points out, “he speaks prose.”

An old artist friend, given to psychotic adventures involving Nazis and the KKK, sometimes said he missed being delusional. But I don’t think he made much art during episodes, and when I last saw him, in 1998, he was living in Central Park. I’ve known several people who suffered psychosis, and he alone felt nostalgic about it. The others fight it or float forever in an alternate universe. Another psychotic friend, dead now, sometimes said things that were arrestingly poetic. She told me that when she left the hospital she wanted to spend some time with me. “You know,” she said casually, “like a billion years.” But her mind was chaos, and soon we couldn’t communicate. I’ve only been approximately psychotic. Once, years ago, alone at my parents’ house during an acid trip, I tried writing. Before long, I lost interest. A week later I found the scrap of nonsense under my bed and felt embarrassed. If deliriants mimic psychosis better than LSD, I don’t see how anyone could write while psychotic.

Mehigan doesn’t take the next step, and suggest that good poetry is actually a sign of a healthy mental life – but we should at least consider the possibility.  In a previous article here at The New Existentialists, Tom Greening suggested that the great works of literature contain more insight on the human condition than any psychology textbook.  It would be wrong to say that anyone who can write such things is necessarily happy – but it does suggest that they have a keen perspective that is at least one component of mental health.

Saybrook University Alumna and Existential Humanistic Institute Board Member Candice Hershman suggests as much in her Rollo May Award winning paper “Poetic Existence:  Words that help us feel alive.”  She writes:

Whether I make the art or appreciate it as a spectator, art has always been one of the fastest ways into the experiences I have needed to heal.  This personal experience has motivated me to want to know more about why, and eventually how I can use art to help people heal or improve their quality of life.  In this paper, I will focus on how poetry, whether writing it or as a spectator, could possibly increase one’s sensory perception and therefore increase awareness and consciousness.  After all, if one is to be reflective and conscious, one must be able to know their senses.  The senses are the seat of perception and emotion.

In fact, as Miller’s paper shows, there is a considerable body of evidence suggesting that Mehigan and Greening are right:  far from being a sign madness, poetry is a sign of someone trying to make sense of their existence, find meaning in their life, and reach a state of mental health.

“Poetic Existence:  Words that help us feel alive” can be accessed below.