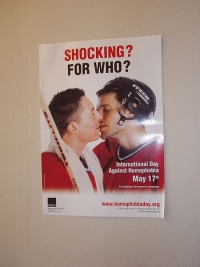 Even 35 years after the American Psychiatric Association declared that homosexuality was not a mental disorder it seems that there is still some idea that being attracted to the same sex is a sickness.

Dr. Marcus Bachman, husband of Representative Michelle Bachman and president of Bachmann and Associations, a mental health clinic based in Minnesota runs a Christian based mental clinic that has recently been in the media spotlight for offering Sexual Re-orientation therapy.

Conversion therapy (or reparative therapy and sometimes known as reorientation therapy) works under the assumption that sexual orientation is a choice; that loving the same sex is simply a state of mind that is generated from past traumas.

That’s not a view shared by responsible mental health organizations.

The American Psychiatric Association issued a report on reparative or conversion therapy in 2004:

The American Psychological Association has issued a similar statement in 1997:

The American School Counselor Association and the National Association of Social Workers have also issued statements arguing that reparative or conversion therapies may bring more harm than good to those who seek help.

Even with the lack of support from the mental health and medical fields, there are still therapists who are offering this as an option to their clients. Why?

The argument for reparative type therapies is that homosexuality is not clearly defined as biological, although research and evidence is overwhelming. A second argument is that an individual can experience so much physical and emotional trauma in childhood that it forever alters their sexual orientation. Finally, and probably the most widely known argument:  homosexuality is deemed as being incongruent and unacceptable to some spiritual and social communities.

This last argument places religious homosexuals in a double-bind, potentially putting them in the position of having to choose between who they are and what they find comfort in.

“Repressing either the sexual identity or the religious identity has implications for emotional well-being whether from the aspect of fragmenting and denying part of their identity, diminishing or eliminating an important contribution to well-being made by religion, or constricting the capacity to meet the existential need for belonging and connectedness”

(The full article is available at the end of this post)

The work of the therapist is to help the client integrate all aspects of self, spiritual and physical. Denying one for the other can only lead to more harm.

When we are looking for meaning in our lives we are looking for a way to find connection to not only ourselves but with the community and society that we live in. It is difficult to imagine the kind of pain caused by the idea that who you really are is somehow going to deny you access to those things that give you comfort and meaning.

There is a clarity moment in Hoffman’s paper that expressing the a heartfelt angst:

These are two completely different messages. The message of Conversion or Reparative therapy is one of “I will only love you if…” which is a conditional experience of life and God.

A conditional experience of love and acceptance does not honor the whole being which is counter to the humanistic and existential perspective of what helps one achieve well-being in life. Harm can only be perpetuated if one chooses to seek a path in life that denying a part of oneself in exchange for a social or even perceived spiritual reward.

In his work The Phenomenology of Perception, Merleau-Ponty stated that our existence permeates our sexuality and vice versa. Perhaps then it could be said that if one denies their deepest sexuality then they are in some sense denying their own true existence.

Even with the piles of research and policy statements asserting that reparative therapies are more harmful than helpful, people may still seek out the treatments. This reflects a larger issue within our society, one that encourages people to conform while losing self rather than becoming self.

Hopefully in time, these treatments will fall from the books the same way those 81 words in the DSM calling homosexuality a mental illness were eventually removed – with reason and advocacy honoring everyone as who they are, with respect to the life and wellbeing of others.