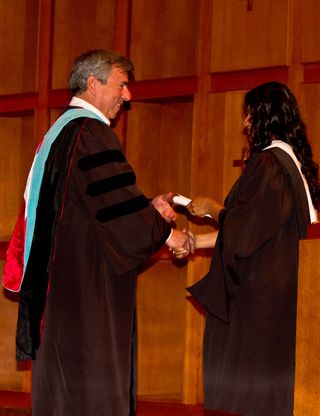 The following is an excerpt from Dr. Shelley Drogin’s remarks at the recent LIOS Graduate College graduation in June 2011:

In a recent planning meeting with the Dean of LIOS Judy Heinrich and Organizational Systems Chair Mark Jones, we were reminded of one of the great educators, Parker Palmer. Parker wrote a book and founded a program called” the Courage to Teach.” As we thought about LIOS Graduate College, the phrase “the Courage to Lead” was uttered and it was one of those YES moments. I want to expand upon the concept of “the Power of Yes.”  But first, let me begin with the alternatives to Yes.

Our minds know all too well NO (all of us are familiar with the terrible twos that are filled with NO’s); we are quite familiar with the MAYBE’s, the NO-BUT’S, or YES-BUT’s. However, in contrast, there are those YES moments in life that our consciousness can fall into, those YES’s that exist beyond our doubts, the YES’s that have no end. When I speak of “the Courage to Lead,” I am reminded that we must have the courage to attend to, to pay attention to, those YES’s.

Courage as a concept and as a word is rooted in the heart. The head of leadership is more about theories of practice and practice of theories. The heart of leadership, “the Courage to Lead,” is about our values and dreams. It is difficult to talk about courage without exploring fear. It has been said that courage is fear that has said its prayers. Let me tell you a true story about the first tightrope walker (taken from Mark S. Lewis’ commencement speech at University of Texas, 2000).

In 1859 the Great Blondin — the man who invented the high wire act, announced to the world that he intended to cross Niagara Falls on a tightrope. Five thousand people including the Prince of Wales gathered to watch. Halfway across, Blondin suddenly stopped, steadied himself, backflipped into the air, landed squarely on the rope, then continued safely to the other side. During that year, Blondin crossed the Falls again and again–once blindfolded, once carrying a stove, once in chains, and once on a bicycle. Just as he was about to begin yet another crossing, this time pushing a wheelbarrow, he turned to the crowd and shouted “who believes that I can cross pushing this wheelbarrow.” Every hand in the crowd went up. Blondin pointed at one man.
“Do you believe that I can do it?” he asked.
“Yes, I believe you can,” said the man.
“Are you certain?” said Blondin.
“Yes,” said the man.
“Absolutely certain?”
“Yes, absolutely certain.”
“Thank you,” said Blondin, “then, sir, get into the wheelbarrow.”

Like that man in the crowd, we often know a lot of things, some with apparent certainty. But also like that man, there will be times in your life when knowing things won’t matter as much as how scary the situation is–and when that happens you’ll have to decide whether or not to get into the wheelbarrow. There are times when, in order to succeed, you will have to trust –when you will have to take a big leap of faith–and when that time comes I hope you will face your fear, say your prayers, and take appropriate action.

And my hope is that “your dreams take you to the corners of your smiles, to the highest of your hopes, to the windows of your opportunities, and to the most special places your heart has ever known.”-anonymous