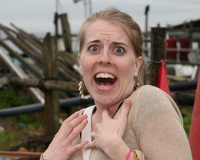 The film featured a group of youth offenders that were put through a diversion program that gained national notiriaty for its harsh reality based experiential. Teens were brought into the Rahway State Prison in New Jersery with members of The Lifers, men servicing life long sentences who wanted Scare these kids straight, straight out of their wrong ways back onto the right way.

These program relied on deterrence-based strategy, showing youth the possibly painful consequences if they chose to stay on the road they are one. Did this program work for the youth who were a part of it? The results were mixed.

A report in 1997 reviewed 500 crime prevention strategies, and Scared Straight programs were placed in the ineffective program pile.

In 2003, the Campbell Systemic Reviews group published a report one the effectiveness of Scared Straight programs. Their conclusion:

“Results of this review indicate that not only does it fail to deter crime but it actually leads to more offending behavior. Government officials permitting this program need to adopt rigorous evaluation to ensure that they are not causing more harm to the very citizens they pledge to protect.”

Why is the program still in place? It could due to the overwhelming number of adults who feel that the program does work. 14 out of the 17 youth from the original 1979 documentary have managed to create a better life for themselves and their families and a few have not. These are pretty good stats. What is dragging the program down is the lack of long term data that shows that scaring and humiliating youth is the most effective way to get them to not to do the same to others.

Are they alternatives to the shock therapy treatment?

Well, there is the new A&E reality tv series called “Beyond Scared Straight” that stays true to the original intent of scaring the kids but they attempt to buffer that with one-on-one counseling between inmates and youth. The shows’ producer, Arnold Shapiro, sharply defends the program as not being like the older ineffective programs and thus is more effective.

His argument for success and purely anecdotal at this point – and in February 2011, it was reported that Maryland and California are both suspending their youth offender diversion programs, both of which had been featured on “Beyond Scared Straight.” This was after the US department of Justice warned them that they would lose their funding if they continued with the programs. Assistant Attorney General Laurie O. Robinson and Jeff Slowikowski acting administrator of the Office of Juvenile Justice and Delinquency Prevention have spoken out against the effectiveness of these types of programs.

Perhaps the problem is that fear-based approaches don’t have good long-term impacts:  fortunately there are other options we can try, one of which is gaining some significant attention from youth advocates.

The most well-known documentary and study of this experience is Dharma Punx, written by Noah Levine, meditation teacher, healed addict and founder of the Mind Body Awareness Project based in Oakland, California.

The MBA project has developed a curriculum that will empower young men and women with the skills they need to make the right decisions based on choice and not on fear.

The curriculum is divided into 10 modules:

Mindfulness brings one into a present state of awareness. Greater awareness helps one to see and understand their reactions to what is happening around them in the moment. With more awareness one is less like to make impulsive and possibly painful decisions. What better tool to give to our kids.

This is a tool MBA provides to its youth. This program has published the results of its work. Dr. Sam Himelstein’s 2010 study of the program showed positive increases in five key areas, subjective well-being, self-regulation, awareness, positive experiences related to the group context and an accepting attitude towards the intervention.

A program based in NY, The Lineage Project, uses a similar curriculum of mindfulness based training to help their youth.

Mindfulness practice is not a soft and fluffy way to approach dealing with violence, anger and pain – on the contrary. Sitting within the self can push an individual to internal places of struggle. These dark parts of self are what most people avoid. This avoidance can take the form of acting out, doing drugs, or causing others harm so that they do not feel with own pain. It is hard work, with the potential for lasting effects. There is a growing body of evidence based mindfulness interventions and effectiveness studies, targeted towards prisoners, at-risk youth, mental illness, trauma and addiction. Each study points to the great potential of this approach to healing.

Any alternatives should consider what helps youth move towards a more positive path in life. We know that it is a matter of making personal choices and being responsible for those decisions. The gift of life includes the freedom to choose. In the model of mindfulness based stress reduction programs, youth given the tools they need to discern, to make best use of their personal freedom to choose a better path.