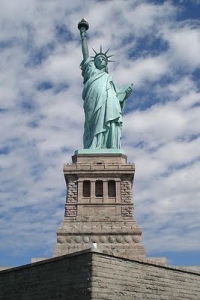 What will you do without her?

At a Town Hall event in late 2010, President Obama was asked: “Like a lot of people in my generation, I was really inspired by you and by your campaign and message that you brought, and that inspiration is dying away….I really want to know, is the American dream dead for me?”

The President’s response: “Absolutely not.”

Like a flat earth or geocentric universe in their heyday, the American Dream is mostly unquestioned in the United States and, arguably, not particularly well understood. What is the Dream? And what does it mean that it may be dead?

There are arguably two distinct, though connected American Dreams. The first is the dream (in a quasi form) of the first Puritan colonists, of the Founding Fathers and their fellow revolutionaries, and of countless progressive movements, themselves quintessentially symbolized in the words of Martin Luther King, Jr. when he said, “I have a dream today.” That dream is the dream of freedom and equality, specifically equality under the law (i.e., equal rights) and equality of dignity. This dream is the foundation of and provides a touchstone for the American political and social systems, the latter including a vision of social stratification (i.e., achieved rather than inherited status) and mobility (i.e., meritocracy). As the basis for the American social system, the dream of freedom and equality provides the scaffolding for the “common” American Dream, the Dream as used here: the dream of the “huddled masses”, “the Joneses”, and “the Rockefellers”, the dream of so many, Afro-American, Asian-American, or Caucasian, blue-collar or white, immigrant or native-born.

The American Dream as utilized here is the dream of success. This is the dream envisioned when, after signing a giant stimulus package into law, President Obama said, “We have begun the essential work of keeping the American dream alive in our time.” Success means simply a preferred outcome. However, in the American mind, this empty abstraction is filled predominantly with the ideas of wealth and for lack of a better term, standing, the latter comprised of such elements as titles, achievements and awards, positions of prestige, informal socially recognized accomplishments, and the like. The rather ugly spawn of standing is the cult of fame. Lastly, almost certainly though rather tacitly, success is itself a means to the dream of happiness, which consistent with the dream of success, is defined principally in terms of gratification and delights, rather than fulfillment and flourishing.

In terms of our existential predicament, the Dream is a potent salve for vulnerability and a powerful tool for expression and actualization of our being. First, we combat the threat of meaninglessness with a profound purpose, namely to achieve. Though we may idealize the idea of “the pursuit of happiness,” we are engaged in a “pursuit of success.” We attempt to be successful. More concretely, we are to go from “rags to riches,” where riches figuratively includes standing (e.g., fame, titles, etc.). Glibly, we strive to be “rich and famous” or to “Get Rich or Die Tryin’.” Still, through achievement, we participate in what Paul Tillich (1952) pointed to as the productive process of humankind and of being itself. We find significance and purpose in this participation.

Similarly, through the Dream, we combat the threat of personal condemnation and the reality of existential imperfection. The Dream is without doubt one of the greatest esteem machines in the world. We gain prestige and status through achievement. We become middle class, then upper class. We are proud of our big, beautiful homes and new cars, our promotions and media coverage, our prestigious degrees and high marks. For some, we even achieve “greatness.” And if we do not achieve, we find solace that we obeyed the commandments of the Dream: We worked hard and never quit; we “try, try, again.” On the other hand, the consolation of our effort is that we are heeding the demand of our being. We are taking responsibility seriously, though rather unconsciously, misguidedly, and quite preliminarily.

Lastly, through the Dream, we stand down our inherent powerlessness and find safety and control. In the darkness of our minds, we understand that money really is power, not as some sword to be wielded in the corridors of power, but as an instrument of efficacy in an inherently contingent world. More concretely, we “make a living” through employment and obtain food, clothing, and shelter through wealth. In higher standing, we face less risk of helplessness. With more wealth, we find greater and greater comfort, until it becomes a conditioned obsession and compulsion. And, more than anything, we are able to deny death in constant pursuit. Earnest Becker saw it all so clearly. However, in moments of accomplishment, we do express efficacy. We cause effect and express our power of being, our autonomy and vitality, and we do obtain some measure of safety.

The Dream is one of the most powerful and influential forces shaping the American mind, arguably more powerful and certainly more insidious than any spiritual worldview. It influences our desires for ourselves and our children, our day-to-day decisions and lifelong aspirations. It fuels our “conspicuous consumption” and thus our massive environmental impact. And it has very real influence on our emotional world, our daily feelings and our general moods. It influences American domestic policy, fiscal, monetary, and legislative. It likewise influences American international policy, impacting, though arguably not dictating, decisions about war, support for foreign causes, dictators or kings, and so on. In the end, the Dream is capable of overwhelming creative beauty and terrible destructive hideousness. And, rather troublingly, the Dream is evangelizing much of the world in spirit, if not name. It is a great world religion, the organizing worldview of “globalization.”

In America, the Dream will not “go gentle into that good night.” The God of success is not dead and it will not die. The Dream will arguably not even be significantly transformed by current economic struggles, not because these struggles aren’t real, but because the Dream is the American brand, etched in its DNA from the earliest colonization of the New World. It permeates American culture and America would be lost without it. What is more, the nature of the Dream itself fuels constant endeavor and renewal.

However, for some, the Dream may be reborn in these trying times, embracing the bright and redefining or discarding the sinister. For clinicians sitting across from the anxiety, despair, or rage wrought by the assault of the Dream, current realities may offer an opportunity: for redefinition of authentic purpose toward eudiamonia, for self-acceptance (i.e., grace) and the embrace of ultimate personal and moral responsibility, and for the discovery of the urgency and clarity of importance that arise from the embrace of our certain end, our death. For a few lucky souls, possibility may be born of struggle. Bluntly, I hope I’m one of those lucky few.