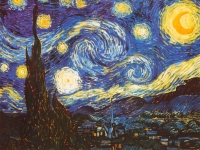 How I wonder what you are

“I have… a terrible need… shall I say the word?… of religion.  Then I go out at night and paint the stars.”  Vincent van Gogh

It was a moonless night and I laid in the balmy August air on a sandy beach, watching and waiting passively for the stars to show themselves to me. Not unlike waiting for the curtains to part so the show can begin entertaining,  I thought; this will be easy, relaxing and a simple pleasure. But I was quite mistaken. Riveted to this sight, I became instead a seeking vessel, my eyes traversing the sky searching for what… for meaning, affirmation, recognition? With eyes aching, afraid to blink lest I miss something, tension and anxiety started to move into my body and although I didn’t have a question, I was most palpably seeking an answer and my whole being became a living, breathing question-mark.

Carl Sagan tells us, “as long as there have been humans, we have searched for our place in the Cosmos…and we have been transfixed by this question: Where are we?  Who are we?” (Cosmos, 1980, p.159). This is the existential frame that has no truth, only authenticity. This is the seed that feeds the motion that drives an individual to seek. Which brings the thought; is seeking the essence of being alive and if so, we are not just reflexive creatures moving one foot in front of the other, living by the confines of only what is seen. We are beings connected to all that is felt and unseen and that is where the banquet lies, if only we dare to go there.

Nietzsche spoke wisely through Zarathustra when he warned: “the time has come for man to plant the seed of his highest hope. His soil is still rich enough. But one day this soil will be poor and domesticated, and no tall tree will be able to grow in it. Alas, the time is coming when man will no longer shoot the arrow of his longing beyond man, and the string of his bow will have forgotten how to whir!” (Thus Spoke Zarathustra, 1995, p.17)

That night, and many nights after, the stars continued to be a projective of longing, wonder and humility. I returned to the beach full of a feeling that had no rhyme or reason except that it existed, and each time I felt bound as though some invisible cord was tying me to the sky. On the days after, I awoke with an awareness of myself, distinctly altered but too elusive to describe. Kierkegaard refers to this as a ‘pregnant moment’ and May speaks of it as a moment of meaning or an epiphany, and that “the grasping of the new meaning always presents the possibility and necessity of some personal decision, some shift in Gestalt, some new orientation of the person toward the world and future” (The Discovery of Being, 1983, p.142).

Now, some weeks later, what I can only say is that I am left with a profound residue and it speaks to me with these words: to wander in the unknown is where we truly begin to come alive and to bear and even delight in the angst and chaos of seeking, we have a chance to become, authentically, ourselves. So my suggestion is, if the burden of life is flattening your world, go to the stars, for they will surely shake you up. And I await the waning of the moon to revisit my celestial oracle.