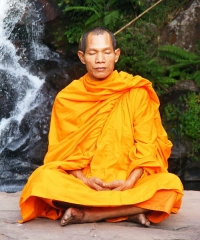 What is the sound of one hand clapping?

This is the stereotyped question that keys us into a contemplative process.  Zen teachers use such paradoxical questions to lead students into contemplative states in which it is possible to become comfortable with ambiguity.  Reflecting on things that are logically impossible opens up the mind to other ways of handling information, ways that are trained out of us as soon as we show aptitude in ‘concrete operations,’ hastening us towards our full potential as ‘formal operators.’

There are some interesting overlaps here.  One style of hypnosis, for example, uses these sorts of logical impossibility to help the logical consciousness back away and let the irrational subconscious take over for a while.  Feeding the relaxed person strange questions like “did you see my purple dog as you came in?” can help deepen the relaxation state into an hypnotic one.

Psychedelic drugs like LSD operate in a similar way, causing many areas of the brain to fire in a dis-coordinated way, without inhibition from the reasonable mind.  It is thus possible to experience impossible situations as though they were real, such as square circles, folded time, or conversations with the dead.

Dreaming is another similar state in which the reasonable mind stops censoring imaginary content.  For example, I once dreamed I was in a house defending it from attack, and simultaneously outside the house attacking it – this bifurcated consciousness is not ordinarily possible.

And, each of these states (hypnotic, psychedelic, dreaming) have been shown to be helpful with trauma and depression.  Losing the inhibition of the rational conscious lets other brain regions communicate more directly, coming to terms with problems in a direct way rather than an orderly way.

Religious people may benefit from the same sort of process through prayerful meditation.  Contemplating God can be a way of contemplating the impossible or the infinite, as in this exercise:

Consider that it is impossible to know God.  Therefore, whatever you know or can imagine about God must be wrong.  Now, consider what you know of God – perhaps that God is kind.  Now you must reject this knowledge, because whatever you now of God cannot be true.  On the other hand, you cannot say god must be unkind, and you must go on to also reject this proposition.  God is neither kind nor unkind?  Equally untrue because, if you can know it, it cannot be true.

Here we have a serious case of ambiguity: a being that cannot be known, and a situation in which the being is neither kind nor unkind.  A paradox.

More jokingly one might ask whether God might be capable of creating a situation beyond its power to undo – could God make a bowl of spaghetti so large even God could not consume it?

What has all of this to do with psychotherapy?

We encourage these sorts of contemplations in others: to accept their thoughts or feelings or body states without judging them, to simply describe them or be with them.  We sometimes challenge the logical mind, which says “this sadness is bad.”  We might ask whether there might be some value in the sadness or what the unwanted behavior is doing that is beneficial.  We might ask a person to imagine their fear as a person sitting across from them and to have a conversation with that person, taking both sides.  We might ask the person to relate a dream as though they were everything and everyone in that dream, or to draw a feeling.

The relationship in an existential office becomes a holding environment for the irrational subconscious, the part of us that has not been training into Piaget’s formal operations and never will be.  It is not the soul, it is not always pretty, and it is not better than this over-consciousness, but it can be coaxed into becoming an ally.  Here we can converse with different regions of our brain/mind more directly and reach new solutions.

Imagine the formal operational brain as a city whose transportation system is laid out in a star pattern.  There is a central hub, and busses move from the hub to outlying regions and back again.  The distance from two adjacent regions might be short, but the trip from outlier to hub to outlier is as long as if the outliers were on opposite sides of the city.

Now imagine we could connect things more efficiently, with a series of concentric rings and radial routes.  Hop on a ring, take a radial to the next ring, and get off where you belong.  The brain is more like this.  The regions of the brain are directly connected, and strengthening these connections can result in better mental functioning (or mental health, if you approve of the term).

Kirk Schneider asks us to think about and enact awe as a therapeutic practice.  Being able to contemplate the infinite in the midst of our troubles has a healthful effect.  I propose part of this effect is tuning out formal logic and tuning in our own innate wisdom.

The therapy-goer is not the only beneficiary of all this contemplation.  The therapist must sit in stillness, focusing on whatever the therapy-goer brings to the foreground, with one eye on process.  This is very similar to meditation, except the inner process under scrutiny belongs to another person.  (Some meditators will tell you that in fact this is no different).

In conclusion, I propose that it is possible to consider existential psychotherapy as a contemplative therapy and a contemplative practice, with benefits for the person beyond mere symptom reduction.

Read all posts by Jason Dias