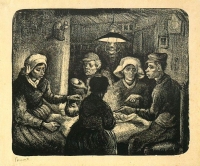 Potatoes grow automatically. We have to make choices.

When pondering the dilemma of being a human being and a member of the human race in these increasingly chaotic and radically shifting times, I sometimes feel overwhelmed trying to make some kind of sense out of it all. We find ourselves filled with so much awareness and energy, alive with the potential for unimaginable creativity and brilliance, and yet also carrying within us the potential for equally unimaginable destruction and ignorance. In attempting to find some kind of framework to make sense of all of this, I have found it helpful to ask the question: “Can we attribute much of the apparent madness and brilliance we find within the behavior of the human race to mere evolutionary growing pains?” Carl Rogers is one individual who contemplated this question very seriously, and I find it helpful to reflect on some of the words of wisdom he has left for us in this regard.

I imagine that when most people think of Carl Rogers, assuming they’re familiar with him at all, they think of his wonderful contribution to psychotherapy in highlighting the importance of striving towards ever increasing empathy, genuineness, and unconditional positive regard as a therapist and in all interpersonal relationships. But to really grasp why Rogers considered these qualities so important, it helps to understand the truly humanistic and existential vision of his that gave fruit to these.

Rogers actually had a very passionate existentialist streak in his thinking, one that may perhaps be partially captured by his use of the term, “the formative tendency.” Rogers used this term to capture a belief he held that there “is an evolutionary tendency toward greater order, greater complexity, greater interrelatedness . . . from a single-cell origin to complex organic functioning, to knowing and sensing below the level of consciousness, to a conscious awareness of the organism and the external world to a transcendent awareness of the harmony and unity of the cosmic system, including mankind.”

When I discovered Rogers’ writing on this subject during my undergraduate years, I was struck by how similar it was to the direction my own contemplation had taken me. I had generally viewed this same principle metaphorically as a “river” that evolution is compelled to follow—but instead of gravity being the energizing principle, as is the case with a physical river, it is the universe’s desire to “know itself” that provides the energy. I found it interesting to imagine that this flow of evolution may follow a cyclical path in a manner similar to the cyclical flow of water upon the earth. Just as drops of water take the long journey down the river all the way to the sea only to evaporate and be carried once again to the top of the river, so perhaps the universe takes on form in a variety of manifestations, “heads out” on the long journey down the river of evolution, being driven by an ever increasing desire to become aware of itself, to fully experience itself, and finally to become itself once more.

Rogers uses an analogy with regard to the formative tendency that I find particularly rich. He recalled a bin of potatoes that his family stored in the basement when he was a young boy; and even though the conditions were highly unfavorable for the growth of these potatoes, they would “begin to sprout—pale white sprouts, so unlike the healthy green shoots they sent up when planted in the soil in the spring.  But these sad, spindly sprouts would grow two to three feet in length as they reached toward the distant light of the window. . . . Under the most adverse circumstances, they were striving to become.” I find this analogy particularly poignant when applying it to the present plight of humankind, but in order to make this connection, I will have to digress for a moment.

I had a powerful revelation a number of years ago that really rocked my personal paradigm. It struck me that while most species on the planet are flowing along harmoniously with the evolutionary flow (arguably not having much choice in the matter), we humans are at a stage where we are really struggling with that flow.  I drew a picture at that time of a man holding up an arrow with the word “will” written along its shaft.  His brow was furrowed and his free hand scratched his head as he studied it.  Will… what is this thing that has become so strong in us, that can harness such profound and beneficial creativity and yet reap unimaginable destruction? While it is tempting to think that there is something innately “wrong” or “unnatural” about the human race in that it has clearly moved so far out of alignment with the natural flow of life, if we maintain the vision of ourselves as merely another manifestation of the universe, it is perhaps more appropriate to consider that we are simply going through a time of intense “growing pains” in the evolutionary process as we strive to master our will before its enormous yet untamed power leads to our own destruction.  Having naturally followed the evolutionary flow, perhaps we have simply come to a point where our will and our awareness have become so strong that we now find ourselves doubting the very wisdom of the natural flow of the universe and even unwittingly struggling against it, which of course entails a profound struggle against the very wisdom that lies deep within our own beings.

Returning, then, to the potatoes in the basement reaching desperately for the light until their very last spark of life fades away, I believe that the great doubt and disconnectedness that we, generally speaking, have developed with regard to our own innate wisdom can be equated with the darkness of the basement. In spite of this darkness, however, our very nature consists of the desire to become, to self-actualize, and so ultimately there is no stopping it until the last spark of life within us fades away. With the darkness of our collective ignorance and disconnection, many of our lives have become pale and twisted like those desperate potato sprouts of Rogers’ boyhood, but so long as there is life, there is hope that these “sprouts” can make it back to the light and ultimately join the natural flow once again. So, the question remains, will our species somehow make it through our “growing pains,” reconnect with our wisdom and the wisdom inherent within all of life, and return once again to live harmoniously with the natural flow of life? Or will we ultimately fail, leaving this difficult passage for the next species that flows along the river to attempt to cross?