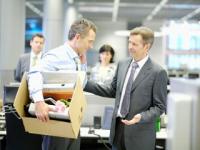 Imagine walking into work every morning wondering if it’ll be your last day there.

That’s how thousands of Bank of America employees probably felt this morning after the company publicly announced its plans yesterday to slash 30,000 jobs over the next few years.

The massive downsizing is part of a cost-cutting measure crafted by Bank of America CEO Brian T. Moynihan in an effort to “bolster profit and the company’s stock,” according to media reports.

So for the sake of profit, the proverbial axe will fall on the company’s people—an organization’s most valuable asset, according to many business writers and theorists. It’s just unknown who will receive the mortal blow and when.

Wondering whether you’ll be one in 30,000 employees who may or may not get a pink slip can’t be easy. And it’s not. Over time, this uncertainty can create all sorts of inner tensions, anxieties, and negative responses that hamper morale and productivity.

I’m sure many Bank of America employees have already started looking for new jobs as a precautionary measure—the let’s jump off this ship before it sinks strategy. That move’s understandable when you have a mortgage to pay, children to feed, and any other expense that can chew away at your livelihood when you don’t have a steady paycheck. The state of our economy promises no immediate chance to bounce back into the workforce soon after a layoff—another reason to begin the job search before the inevitable happens.

Those who aren’t actively looking are at the mercy of what may or may not happen.

Getting booted from any job wounds the psyche on a very subtle level. It cuts deep into the worse aspect of ourselves—our egos. And the pain is unbearable.

In his 2000 book Let Your Life Speak: Listening for the Voice of Vocation, author Parker J. Palmer described what that pain feels like as he reflected on how he felt after losing a job in his youth.

“My sense of identity, and my concept of the universe, crumbled around my feet for the first, but not last, time,” Palmer wrote. “What had happened to my limitless self in a limitless world?”

If we sulk in despair, the wound our ego experiences can turn into one nasty scar that—depending on how thick-skinned you are—can be difficult to heal.

Do we really need to put ourselves through this torturous, self-inflicted agony?

So let’s try viewing the layoff experience from another perspective—an empowering perspective.

I’ll start by throwing out one cold, hard fact: Most people love complaining about their current jobs regardless of how good they are at it. Haven’t you noticed it’s the one thing that usually bonds office workers together?  Yet there’s something about the odious job that ties a person to it—the security it offers.

When that security is taken away through a layoff, people usually feel bruised. They generally perceive the removal as the equivalent of being told you’re no good at something that the workers who weren’t downsized excel at.

That’s a misperception in my opinion. What really hurts—what really, really cuts deep—is the loss of daily security and the uncertainty that’s suddenly uprooted.

Many people lapse into some form of psychological paralysis or depression after a layoff because they spend too much time focusing on personal faults when, in reality, the layoff had nothing to do with them or who they truly are.

In his book, Palmer explained why being cast off by an employer hurts so bad in the U.S.

“Like many middle-class Americans, especially those who are white and male, I was raised in a subculture that insisted I could do anything I wanted to do, be anything I wanted to be, if I were willing to make the effort,” Palmer wrote. “The message was that both the universe and I were without limits, given enough energy and commitment on my part. …All I had to do was to get with the program.”

So if you’re laid off from a job that you hate, is there a point in making yourself experience a personal onslaught of self-destructive emotions?

There’s no reason to. After all, as Palmer wrote, “…there is a great gulf between the way my ego wants to identify me, with its protective masks and self-serving fictions, and my true self.”

When we cling to jobs we hate for the sake of security and fail to explore our inner vocational yearnings, we can hit some serious snags when that security we bank on is swiftly taken away, especially in this trying economy.

Many people have had to face that reality head on in recent years and some have had no choice but try new ventures that have been more in line with their true vocational loves. That’s when a person really finds his or her vocational purpose and meaning—when he or she stumbles across the work they truly love.

The others? They’ll miss the routine and security. They’ll suffer the fear of letting go, trying something new, and trusting that everything will fall into place once again when the time’s right.

Every one of the 30,000 Bank of America employees facing a potential layoff are going to have a chance to find a new calling in life.

That’s not necessarily a bad thing.