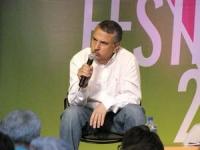 I tuned into CNN this morning the way I typically do before breakfast when a quotation on the screen immediately grabbed my attention: “shock to the system.”

The quote belonged to New York Times columnist Thomas L. Friedman who was discussing how he believes that a third-party, presidential candidate could deliver the systemic jolt—the “shock to the system”—America needs to make the country a global leader once again.

Friedman’s quote struck me more than his theory did. Having only caught the tail end of his interview, I decided to research his “shock to the system” theory further after breakfast, like any good [former] journalist would do.

I found that Friedman’s been kicking the idea of national shock therapy around for some time. He’s pushing it harder now that he’s in the midst of promoting a new book—That Used to Be Us with co-author Michael Mandelbaum—which formally birthed the “shock to the system” quote.

A review of the book published today by the British newspaper The Independent noted that “few could fundamentally disagree with the authors’ diagnosis. The U.S. has a political system generating only small responses to big problems. American schoolchildren have fallen behind and the country risks falling behind in innovation. Meanwhile, it is perilously dependent on deficit funding from China and oil from the Middle East.”

But, according to the review, Friedman and Mandelbaum’s prescriptions to fix the U.S. system “range from the already consensus to the hopelessly naive.”

Friedman and Mandelbaum “propose a bizarre ‘shock to the system’, an independent candidate for president next year to advocate just that,” according to The Independent. The authors “don’t want him (or her) to win. Just to garner enough votes to galvanise the next president and the next Congress into enacting their program.”

Posing a shallow threat to the current leadership—that’s the “shock to the system” Friedman’s promoting.

The Independent is right. That remedy is very simplistic, especially when you’re looking at a complex system, like the U.S. government.

When angry shareholders demand change to improve their company’s financial outlook, they pose all sorts of veiled threats. The threat that generally works is aimed at the leader who’s usually deposed and replaced immediately. That’s the same threat Friedman wants to pose to both Democrat and Republican parties—get it right or face removal.

Here’s the thing though: That threat was already posed and executed during the last congressional and senate elections on Capitol Hill, which ushered in many fringe politicians who have caused several stalemates in both government houses. Did the threat work? Nope. It actually made matters worse.

With a majority of Americans already complaining about the polarization of U.S. politics, I would say Friedman’s “shock to the system” theory only serves to fan the flames of discontent even more.

Here’s what’s fueling his theory: Like millions of U.S. voters, Friedman believed Barack Obama—a candidate Friedman admittedly voted for—would be the leader who could change things on Capitol Hill immediately. With a rally cry calling to address “the urgency of now,” Obama promised much in a very short span of time.

Trouble is, corrective change never occurs quickly—that’s a fallacy. The more complex the system, the longer you have to wait for change to take effect.

I would argue that what the U.S. system really needs to do to foster long-term, systemic change is identify the leverage points—or points of power that spark proper change—that can get the country to a more desirable state across the board. In order to do this, Capitol Hill needs to drop the winners-take-all groupthink that’s plaguing U.S. politics in favor of developing collaborative efforts that can effectively turn things around.

With all due respect to Mr. Friedman and Mr. Mandelbaum, the solution they offer in their new book is the kind of solution that systems thinker Donella H. Meadows and MIT’s Jay Forrester would call counterintuitive.

Even though “people deeply involved in a system often know intuitively where to find leverage points, more often than not they push the change in the wrong direction,” Meadows wrote in her 2008 book, Thinking in Systems: A Primer.

As a system becomes more complex, its behavior and reactions tend to become more and more surprising. This happens because systems are not intuitive, Meadows noted. “Or if they are,” she wrote, “we too often use them backward, systematically worsening whatever problems we are trying to solve.”

Shocking the system—as Friedman and Mandelbaum propose doing—may not be such a hot idea after all.