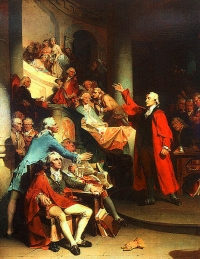 “Is life so dear or peace so sweet as to be purchased at the price of chains and slavery? Forbid it, Almighty God! I know not what course others may take, but as for me, give me liberty, or give me death!”

Every American school boy or girl learns the famous words of Patrick Henry at some point in their young lives. America is passionate, almost fanatical about freedom. The idea permeates American culture and institutions. It is the foundation of the American economic system, which is to say, free-market capitalism. It is equally the foundation of the American political system, from the Constitution itself to ideas like suffrage and consent, representative government, freedom of religion, speech, or assembly, and the like. It has been the battle cry of countless domestic social and political movements and of numerous American international causes (e.g., “making the world safe for democracy” or “the forward march of freedom”). Likewise, the idea permeates America’s national symbols, memorials, songs, and oaths, such as Independence Day, the Statue of Liberty (i.e., Lady Liberty or Liberty Enlightening the World), Independence Hall, the Liberty Bell, the Star Spangled Banner (“…the land of the free”), the Pledge of Allegiance (“…with liberty and justice for all.”), America: My Country, ‘Tis of Thee (“sweet land of liberty…”), and so on. The principle of freedom is an essential part of the American interpretation of its past, vision of its future, and view of its present. It saturates the American mind. This fact is what makes the coercion, if not relative enslavement of the American mind so incredibly ironic and so very tragic.

The meaning of freedom is more complex than we first might expect. On the one hand, freedom means absence of constraints or coercion. This definition lies at the heart of terms like slavery or tyranny. The absence restrains compulsory forces and creates a vacuum of opportunity, of potential, that can be filled. This meaning of freedom is central to the American narrative on freedom, specifically as it relates to external constraints.

On the other hand, freedom is a capacity of the self. We have freedom; we bear it. In this case, freedom means self-command. We are agents in the world, able to call resources to cause effect. We experience freedom as deliberation, decision, and responsibility (Tillich, 1951). In deliberation, we observe and evaluate options. To observe, we detach from the objects of evaluation, separating the subjective “I” from the object. Similarly, as Rollo May (1981) describes, we often must create a pause between stimulus and response. We must say “no” to ourselves, which is itself an act of freedom, to create a window for observance. In decision, we cut off possibilities and choose. We say “no” and “yes.” Finally, in agency, we are responsible. We must answer if questioned, specifically by ourselves (Tillich, 1951; Tillich, 1952).

To be fair to your everyday, run of the mill American citizen – myself included I suppose – mental coercion is not a particularly American problem. It is a human problem. We are often dominated by our internal drives, tossed about by the tyranny of external stimuli and internal compulsions. Socialization and the “super ego” pose their own challenges, though they arguably serve important functions in some form or fashion.

Likewise, we are often commanded by our emotions, those sometimes delightful, sometimes disagreeable experiences that color and inform our world and compel our being. Though anger shows itself to be potentially the riskiest, fear and its foundation, anxiety, is our ultimate challenge. Our modern attempt to rationalize the world and thus seemingly to eradicate our emotions only exacerbates the challenge of our relationship to these phenomena.

Further still, we are all too often driven about by our belief systems and patterns of thought. This cognitive challenge is central to what Heiddegger (trans. 1962) called das Man or “the One.” We owe our being to society’s knowledge and beliefs in particular, including its ideals and values. Every society has an interpretation of what it means to be in and of that society, and each Dasein has been built and has built itself in and through these interpretations. The primary benefit of “the One” is understanding. The risk is leveling conformity (e.g., Nietzsche’s “herd” or Kierkegaard’s “mob”) and more deeply, I would argue, compulsive mental coercion.

Last of all, no doubt, drives, emotions, and belief systems interrelate and work in concert, creating a self-reinforcing enclosure. For instance, our beliefs dictate what we can and do feel and how we cope with our drives. At the same time, our drives and emotions influence our belief systems in moments and importantly over time.

These coercive forces are exacerbated by, broadly speaking, the unknown. On the one hand, with regard to the self, the unconscious creates a massive roadblock to freedom. Simply put, it is impossible to be truly free when deliberation and decision are dictated by the unconscious. And, I believe the problem is more complicated than the typical understanding of the Freudian unconscious. Simply put, the “I” of agency itself – the agent that deliberates and decides – is often unconscious. We are “undifferentiated” from our beliefs; we are “imbedded” in them, unable to observe and evaluate, unaware that we are actually choosing moment to moment.

At the same time, with regard to the world, myriad situations are filled with the unknown, specifically with ambiguity. In a manner of speaking, we live in a collective unconscious. As an example, imperfect communication creates ambiguity of intension and thus creates hurdles to understanding and reasonable exercise of freedom (i.e., deliberation and decision). Much ambiguity could be removed potentially. Some is existential.

With this framework in mind, let us now briefly revisit the America of Patrick Henry using the lens of das Man in particular. In America, the tyranny of the American Dream and success, of free-market capitalism, the pursuit of happiness, and our “consumer society” command much of our daily lives. We need look no further than our hapless attempt to slow our massive environmental destruction. In the religious sphere, numerous belief systems are, at best, symbolic attempts to actualize potentiality, cope with the difficult, answer the unanswerable, and experience “the holy.” At worst, they are complete nonsense that deceives and harms (e.g., ever seen a young child threatened with hell and damnation and told that they are inherently broken by “Original Sin”?). Last of all, more generally, we are “American.” We are the self-proclaimed standard bearers and vanguard of freedom for the world, and more to the point, because of this fact, we are “exceptional”, unique and extraordinary. We are “first among equals”, whether we say it or not.

To be fair, our enslavement is not total. Also, Das Man has its benefits and is, in some ways, necessary. And of course, there is reason to hope. Still, we are too often powerless in the face of our own internal dynamics. We are slaves in our own bodies. The addict, “crimes of passion”, and mass racist genocide, institutionalized bigotry, or individual “hate crimes” are simply the most extreme evidence of our current enslavement. These situations are easy to see and grasp. The day to day acts of injustice – what some call “evil” – driven by our relative enslavement are the more insidious tragedy.