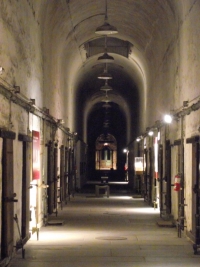 We are approaching that time of year known as “Halloween.”  While Halloween may not have achieved the holiday status of Thanksgiving or Christmas, it is second only to Christmas in revenues (seven billion) generated by sales of scary costumes, decorations, candy, and haunted activities.  It is the season when my grandmother would recite the old Cornish prayer, “From ghoulies and ghosties and long-legged beasties, and things that go bump in the night, good Lord deliver us.”  My grandmother was not Cornish nor did she pray, but she did celebrate Halloween and demand trick-or-treaters perform a trick before she would give them candy.

When my children were little, I suspended “Wanda the Witch” on our front porch. She rode a broomstick.  Wanda flew in every Halloween until my daughter, who became self-conscious as an adolescent, no longer wanted her.  My son has always loved Halloween and even expressed his wish for a Halloween wedding but was turned down by his bride-to-be (as if marriage isn’t scary enough!).  With grandchildren, at an age when I thought they wouldn’t be “scared to death,” I would blindfold them and tell them horrifying stories with props – peeled grapes for a dead man’s eyes; cold spaghetti for his brains; and a stuffed, frozen rubber glove for his hand.  They loved it!

The grandchildren are now teenagers and for a Halloween treat this year we had a multi-generational outing with grandparents, parents, grandchildren and their teen friends to “Terror Behind the Walls” at the Eastern State Penitentiary in Philadelphia, Pennsylvania.  Abandoned in 1971, the prison gets its major source of funding from “Terror” to keep it open as a National Historic Landmark.  Children under seven years are not permitted to attend; all people who participate in the haunted event are required to sign a waiver before they enter the prison.

For this “fun” the charge is $20 per ticket – tickets become progressively more expensive as it approaches the bewitching hour of midnight (the most expensive tickets are $30).  (According to the Haunted House Association, haunted adventures are now a one billion dollar industry.)  For two hours, we followed a path inside and outside the prison where 200 actors, dressed as inmates with horrifying makeup, jumped out at us.  There were strobe lights, spooky mists, cans banging, moans, and screams.  The kids loved it!

The experience prompted me to wonder, “Why do we like to be scared to death?”  I asked my grandchildren who replied, “It is fun!”  When I probed, “Why?” I got the response, “I don’t know.  It just is.”  One teen answered, “It’s like an adrenaline rush.”  I responded, “It really makes you realize you’re alive.”  He responded, “Yeah.”  I wondered if my grandchildren who were with boyfriends and girlfriends enjoyed being scared because it gave them an “excuse” to huddle together, the hero boys “rescuing and comforting” the terrified girls.

According to David Rudd, dean of the College of Social and Behavioral Science at the University of Utah, people enjoy feeling scared and seek the feeling out because, deep down, they know they are in no real danger.  This thought was supported by a couple my husband and I recently joined for dinner.  The wife told of a haunted stagecoach event that has scary people jump on the coach mid-ride, drops off passengers in a corn maze, and as a finale, delivers them to Bates Motel of Psycho fame (a virtual Halloween trifecta!).  Her husband smiled and admitted, “I really like being scared when I know I am safe.”  But why?

Existentialist philosophy may offer some ideas.  Central to Existentialist philosophy and psychology are the contrasts of “being” and “non-being.” Rollo May (1958) points out that humans are unique animals in that we have Dasein; we are aware of ourselves, our responsibility for ourselves, and that we are in a continual state of becoming.  We are also aware that at some point, through death, we will be no longer.  May states the decision between “being” and “non-being” does not pertain to a one-time decision between life and suicide.  Rather, it is a series of choices we make almost every instant.  The ideas of being, non-being, freedom, choice, decision, responsibility, authenticity, anxiety, angst, dread and guilt are key to Existentialist philosophy.

There are many ways we may choose “non-being” in our lives – by not being aware of what we think and what we are choosing, by making inauthentic decisions, by not determining our values, by following the values of others, the list is endless.  Actions leading to non-being lack authenticity and responsibility.  While freedom and our awareness of it can be a positive force, there are times when we may not be aware or make the best decisions.  Existentialists know the goblins are one step away to haunt us with non-being when we make poor choices, misuse our freedom, and are not responsible. This is when anxiety, angst, dread, and guilt can enter in – they are the “ghoulies and ghosties and long-legged beasties, and things that go bump in the night” for Existentialists.  It is enough to make you sick and often does.   Responsibility to lead an authentic life is a tall order; I question if even self-proclaimed Existentialists think of the responsibility of choice, or the possibility of non-being, on a daily basis.

Being “scared to death” reminds us that we are vulnerable, our lives can change at any moment for the worse, and that death or non-being is possible at any time.  Most of us would prefer not to experience traumatic life events to remind us of these facts.  However, being “scared to death” in a safe environment such as a haunted house, with a guaranteed outcome, can be fun.  My husband, a motorcycle rider, suggests, “People want to go up to the edge without fear of going over it.”  Being “scared to death” can “get the adrenaline going” – it gives us a thrill just to know we are alive!