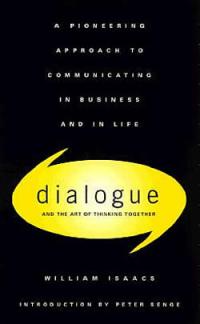 At Saybrook’s August 2010 residential conference, I participated in the generative and strategic dialogue seminar facilitated by Dr. Nancy Southern, Dr. Kathia C. Laszlo and Dr. Alexander Laszlo of the organizational systems program. Learning about the difference between discussion and dialogue was particularly transformative and deepened my understanding of the concept of “thinking together”—at work, at home or in the community.

This learning enabled me to better understand why some discussions I engaged in the past were so exhausting, energy depleting and, at times, painful. I understood the makings of a conversational beat-down at work, at home, or in the community. I understood how I have contributed to “beating down” on others’ spirits and how others have contributed to “beating down” on my spirit at home, at work or in the community. The seminar’s assigned readings—David Bohm’s 1996 book On Dialogue and William Isaacs’ 1999 book Dialogue: The Art of Thinking Together as well as Dr. Southern’s communicative competence model and perspective on hermeneutics and the Laszlos’ writings on evolutionary systems design—helped me see all of this.

Even more eye-opening was the realization that—on my part (and the same probably goes for most)—my intentions were never to “beat down” on anyone’s spirit. I thought that I was doing what needed to done—to convenience others of my point of view; to win others over. I now know that I was operating from and within a sphere that Bohm would attribute to a failure to “suspend,” which made “proprioception” impossible. Proprioception would have presented a mirror that might have enabled me see a reflection and the results of my thoughts and thought process.

Bohm and Isaacs’ definition of dialogue as a process—as opposed to a technique—was very insightful and introduced a deeper meaning of the idea of “thinking together.” Bohm’s teaching on “collective participation” summarizes the differences between discussion and dialogue:

“All of this is part of collective thought—people thinking together. At some stage we should share our opinions without hostility, and we would then be able to think together: whereas when we defend an opinion we can’t. An example of people thinking together would be that somebody would get an idea, somebody else would take it up, somebody else would add to it. The thought would flow, rather than there being a lot of different people, each trying to persuade or convince the others.”

I take great learning from the idea of suspending assumptions during the dialogue process. Learning about the emergence of new meaning and value or benefit realization that is generated when a group of people collectively “suspend” was profound. I now have a better grasp of how the process of dialogue enables what Bohm refers to as “participatory consciousness” when, Bohm wrote, “…everything can move between us. Each person is participating, is partaking of the whole meaning of the group and also taking part in it. We can call that a true dialogue… if everybody sees the meaning together, of all the assumptions, then the content of consciousness is essentially the same… if we could all share a common meaning, we would be taking part and communicating and creating a common meaning.”

Bohm’s idea of “participatory consciousness” and the value he attributes to common or shared meaning—an outcome of dialogue—greatly informs my interest in designing and implementing social change. Bohm wrote, “a society is a link of relationships that are set by people in order to work and live together: rules, laws, institutions, and various things. It is done by thinking and agreeing that we are going to have them, and then we do it. And behind that is a culture, which is shared meaning… I am saying society is based on shared meaning, which constitutes culture. If we do not share coherent meaning, we do not make much of a society.”

It was extremely insightful for me to see how Bohm builds up the idea of society, culture, and shared meaning and how we can create coherence from incoherence by targeting the realization of shared meaning. “If we work this through,” Bohm wrote, “we will then have a coherent meaning in the group, and hence the beginning of a new kind of culture—a culture of a kind which, as far as I can tell, has never really existed…. I am saying that a genuine culture could arise in which opinions and assumptions are not defended incoherently. And that kind of culture is necessary for the society to work, and ultimately for the society to survive… shared meaning is really the cement that holds society together, and you could say that the present society has some very low-quality cement it cracks and falls apart. We really need the right cement, the right glue. And that is shared meaning.”

Appling my learning from Bohm that “shared meaning” is the “glue” or “cement” that holds society together and helps create coherence, I better understand and realize the great potential of dialogue in addressing some of the complex social issues related to cultural assumptions and how they enable cultural practices and processes that impede human development that, in some cases, include the acknowledgement and respect of human rights. I realize, however, that it would take a proper balance of dialogue in the purist sense where no topic or agenda might present challenges, but might propose what Bohm called “limited dialogue.”

The cycles of the dialogue process described by Issacs along with the principles and practice of dialogue he outlined enable me to create a space that can hold a collective generative expression. Isaacs noted that “people speak three different languages when they express themselves: the languages of affect (or feeling), meaning and power.” Awareness of this, helps us avoid what Issacs called “language breakdowns.” Proposing that people organize power and relationships within a system from a perspective that is open, closed, or random, Isaacs stressed, “These preferences guide our thinking and feeling whether we are aware of them or not. Becoming aware of another person’s and our own preference can give us an enormous advantage in understanding and communicating well. Understanding these levels can help us suspend fragmentation. Only by including all the elements of the whole can we actually experience wholeness.”

All in all, my learning from the dialogue seminar greatly informed my way being with self and others and helped me see the potential and possibilities of applying dialogue as a real intervention in my life work. I am more attentive to my assumptions, reactions and opinions. More and more, I am learning to listen deeply for understanding, suspending and refraining from defending and instead seeking to create spaces where “shared meaning” can sprout and thrive.