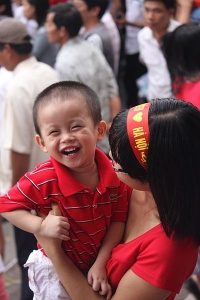 Over the past few years most of us have heard the study results indicating that children laugh much more than adults; some of the discussions place the disparity as high as 300 times per day for children as compared with 15-20 times per day for adults. Whether or not there is significant research to support these outcomes, one thing is certainly clear: children are more able to readily and whole-heartedly engage in at least one activity known to spontaneously produce laughter – children play.

At the age of six, my niece spent the summer with us. From the moment she awoke till the time I corralled her into the shower at night, she was engaged in some sort of play. As a family we all agreed that she was an expert in the area of play. The type of play I am describing here does not include the following: organized sports, summer camp, community activities which require adult structure and oversight, or any other activity which includes an adult governing body. Her special expertise was in the area of what I shall refer to as spontaneous child play; that form of play which only requires a child to seek out other children and engage in a limitless number of adventures involving toys, bikes, skates, chalk, crayons, rocks, sticks, trees, pieces of string, or whatever is within arm’s reach.  When I would ask her what she had been doing, she always gave the same response, “playing.” I tried to interest her in going to soccer camp, or taking tennis lessons, but she was too busy and had no interest in “learning a new skill” or “meeting new kids.” Her response was that there were always kids around the neighborhood, and she wasn’t interested. When I remarked, “You’re really great at playing;” she answered simply, “That’s what I do.” It is that simple statement that I have chosen to comment on in this reflection.

Upon reflection of the above exchange I realized that in our adult lives there are often very few things in which we engage for no particular reason. Most of our activities are clearly goal-directed. Even when I take my daily walks, I encounter other adults who are walking to lose weight, to lower blood pressure, to improve overall health, to live longer, to quiet their minds, to commune with nature; none of us have yet to say that we walk because, “that’s what I do.”  Our lives seem focused on doing things that will help us to achieve some goal, attain some outcome, or move us in the direction we believe we need to be going. Where have those moments gone that are simply ends unto themselves, without goal or focus or direction. I know that we’re busy, and live important lives, but I wonder if perhaps the reports of children laughing so much more often than adults may be related to a loss of engaging in things because “that’s what we do,” rather than for a particular goal or outcome.

A meaningful example of this can be found in the words of Jesus from the gospel of Matthew: “Look at the birds in the sky; they do not sow or reap, they gather nothing into barns, yet your heavenly Father feeds them” (Mt, 6:26 New American Bible). In this observation we are presented with a description of a state of perfect being; the birds are not performing any goal-directed activity such as reaping or sowing, yet their existence is specifically noted during one of the most significant philosophical passages of the New Testament, The Sermon on the Mount. Jesus’ reflection continues to include the wild flowers of the field, noting that they too do not produce anything other than their own existence, yet are the envy of kings for their beauty and splendor.  Perhaps what these birds and flowers share in common with my niece, is that they are all cooperating with Life by doing what they do. The birds and the wild flowers, and the children in those moments of pure, undirected play are all cooperating with life by being fully engaged, and living for the sake of life. This state of being becomes an end in itself rather than a means to some other end.

Perhaps we can all learn a lesson about existence from the birds of the air, or the wildflowers of the field, or a child who has mastered the art of play, then maybe we’ll all laugh more often (oops, there’s another goal).