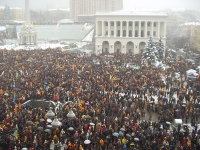 When history looks back on the twenty-teens, I think this will be remembered as a decade of peaceful revolution.

The Tea Party have become activists for human government. Whether you agree with them or not, and whether you see their purpose being subverted by corporate greed or not, theirs began as a social movement. The Arab Spring in the Middle East began as a series of peaceful protests. Governments have turned some of them into violent conflicts while others have maintained their peaceful stance. No successful coup has been entirely bloodless, and yet these efforts have lacked much of the bloodthirsty nature of prior coups – for example, during the regime-toppling seasons of the 1970’s and 80’s in Central and South America.

Back here at home, the newest revolution is the Occupy Wall Street movement. This movement is eerily similar to the Tea Party movement: people trying to take back their country, to have a government that represents their interests and values. As with the Arab Spring, this peaceful movement has been marred by violence in places but so far has remained largely bloodless.

Syria could learn a lot from our government when it comes to this sort of protest movement. As in the radical activism of the Vietnam war protesters, the Occupy protesters get the most attention when directly confronted by the government. And violence leads to violence. If Syria’s leadership is sincere about defeating any protest movement, their best bet is to ignore them completely, or pander to them in speeches while doing nothing in policy, or to discredit them on television.

We have another revolution under way. The American Psychiatric Association has invested a large amount of money to develop the DSM-5, a weighty tome that will dictate how psychological services are provided for the next two decades or so much as the DSM-IV has done. The DSM-IV spread its influence worldwide by providing “scientific” and “empirical” bases for the disorders contained therein, and thus crept into the world lexicon as the ICD 9 and 10.

There are serious concerns with the DSM-5. These include its ever-increasing pantheon of disabling conditions that require treatment, turning every human emotional experience into an opportunity to diagnose and medicate, as well as the undue influence of for-profit pharmaceutical interests at every level of development.

A rising wave of resistance is creeping into public consciousness. The British Psychological Society (BPS) published an open letter to the DSM-V committee, protesting the increasing pathological stance on basic aspects of the human condition. The American Psychological Association Division 32 (Humanistic Psychology) has followed suit by endorsing the BPS letter and beginning a petition to stop the development of the DSM-5. At time of this printing, the petition has garnered over 4100 signatures and has spread well beyond the bounds of Division 32, being endorsed by members of other divisions. It has even crossed over from psychology, increasingly dissatisfied with being dictated to by psychiatry, into psychiatry itself.

If the American Psychiatric Association is wise and invested in publishing this work of corporate interest and oligarchy, they too should learn from the fallen regimes of the Middle East and the ongoing government of the United States. The best thing they can do is to ignore the movement completely or discredit the movement in the press. Once they begin a direct confrontation, their destiny is failure.

My friend Bent Dean Robbins suggests that the best thing for us is if the DSM-5 committee succeeds in publishing this work. This would free our profession from the delusion that we have any influence left over how Psychiatry dictates to our profession and help force psychology along a road of developing more useful and humane tools for the practice of psychology and psychotherapy. This would be a long, hard road, full of politics and prejudice. Beginning to convince insurance panels to not force DSM criteria on us, for example, is the most basic infrastructure task in this endeavor and would take the devoted action of many psychologists – and probably court cases and new scientific study.

As with a psychotherapy client, we are not really willing to engage in all this painful, effortful change until the alternative to changing is much more painful and effortful. Will the DSM-5 then be the best thing that ever happened to us?

As a post-script, the DSM-5 committee has responded to the American Psychological Association in an open letter you can read here: http://www.dsm5.org/Newsroom/Documents/DSM5%20TF%20Response_Society%20for%20Humanistic%20Psychology_110411.pdf

This letter admits no fault, proposes no changes, and downplays the problems. Another friend, Richard Bargdill, has pointed out the obvious flaws in starting the data-gathering process after the constructs are already in place, and I myself am interested in what sort of psychologists are involved with the project. By definition, they would have to be psychologists invested in the medical model of psychology.

For further reading, try Medcape at http://societyforhumanisticpsychology.blogspot.com/2011/11/petition-calls-for-critical-changes-to.html, a Psychology Today piece calling for independent review of the DSM-5 at http://www.psychologytoday.com/blog/dsm5-in-distress/201111/dsm-5-needs-independent-scientific-review, a call to sign the petition (also from Psychology Today) here: http://www.psychologytoday.com/blog/broken-hearts/201111/elements-the-proposed-dsm-5-travesty-potential-tragedy, and this fascinating piece in Psychiatric Times: http://www.facebook.com/l.php?u=http%3A%2F%2Fwww.psychiatrictimes.com%2Fblog%2Fdsm-5%2Fcontent%2Farticle%2F10168%2F1983091&h=QAQG9mBavAQGtULu2Nr4ZZwnyNEbm4dUxHA1Eav_bDDVrVg. This issue has also recently been publicized in Nature and in The Scientific American.

The revolution has not yet been televised, but it is all over the internet and print media, and television will follow shortly. Stay tuned for further developments. What can you do to help? For starters, visit the official petition page at http://www.ipetitions.com/petition/dsm5/ if you’ve not been there already.