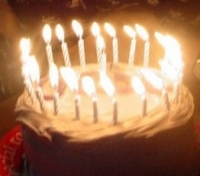 I turned a year older this month.

And as a good existentialist, naturally thoughts of my birth lead inexorably to thoughts of my life and my death. What does it mean now to have a birthday? A few years back, instead of wishing a dear friend from high school Happy Birthday, I chose to wish him Happy Being-in-the-World Day, since he is a professor of philosophy who has hosted Heidegger reading groups. So is a birthday the anniversary of when we come into Being-in-the-World? But then would physical death mean the end of our Being-in-the World? Try telling that to Elvis or Marilyn, who still seem to possess Beings-in-the-World with all their memorabilia despite however many years it has been since they have left their physical bodies.

Heidegger (1927/1962) tells us that our Being-in-the-World necessarily means an existence in a temporal world. Merleau-Ponty (1962/2001) then says that this World that we see as temporal—as possessing a past, present, and future—only acquires those roadmarkers when there is a subject there to delineate past from present from future. In our society, birthdays often serve as handy roadmarkers of the time periods in our lives and even our lives in the memories of others once we have left our bodies. Indeed, birthdays are often used as occasions to celebrate the lives people such as famous movie stars, composers, sports heroes, and rock stars who have died with tributes and festivals.

Birthdays are the way we all mark time. And as we age, birthdays may be the clarion call into the future, a remembrance of things past, or simply another day on the calendar—another present moment.

I had the blessed fortune to bear witness to my niece turning two this year. For her, it was a day just like any other, except that all these people around her kept telling her it was her birthday and they kept asking her how old she was and making her hold up two fingers and say “two.” At some point, I imagine it was a little tiresome for her, until she got some donuts at school and cupcakes with sprinkles and a glowing candle at home. Even then, I don’t believe she had any sense of the time that had passed that brought her to this day. And it did not really matter to her that, due to circumstances beyond her control, the “official” party for her birthday came a month later. Any day where she could get something sweet covered with rainbow sprinkles could be a “birthday” to her.

My cousin’s twin sons, born on my birthday a mere 30-something years after me, are about to celebrate their B’nai Mitzvah. This birthday for them will be a religious ritual and rite of passage—“today I am a man”—where at the tender age of 13, they will look forward towards their entrance into adulthood according to Judaism, and puberty according to the physical body. Of course, there will also be the big party and probably lots of presents, many in the form of checks!

Just a little more than eight years ago, we celebrated my younger brother’s birthday mostly by celebrating the birth of his first child—my first nephew—and my parents’ first grandchild. Born just after midnight exactly 30 years after my brother, my nephew’s arrival marked a new stage in my brother’s life—fatherhood. The baby of one nuclear family became the parent in another. So that year, my brother had no party, no balloons, no birthday cake, but got the best present money cannot buy. But again, this birthday signified an end to a past form of existence and looked forward to a new way of being.

Before she passed away, my maternal grandmother celebrated her 95th birthday in the Minnesota nursing home she lived in for the last few years of her life.  It was actually a festive catered affair in the good Midwestern tradition, with lots of food platters and plenty of leftovers! Family came to see her from all over the country, coast-to-coast, and she, as matriarch of the family, received them all. One-by-one they came to greet her in her wheelchair in the same way one approaches the queen on her throne. In the case, many more jokes and stories were exchanged, with all the tales of people she had encountered over her many years. It was a time for reminiscence, for memories, for sharing. This was about the past, not the future. The fact that many of those people might never see her again after that day was buried so deeply in guests’ psyches that it almost made the laughter and joy reverberate that much louder.

And now I mark this week a point midway between my niece and my grandmother’s last birthday. I cannot say if it is middle age because I do not know where it will end. Perhaps middle age was long ago. Or perhaps it is yet to come, and somewhere in my future lies a Red Corvette waiting for my midlife crisis. Not that I really need one with the great public transportation in New York City and the tremendous dearth of adequate parking places. Part of being an existentialist is also living with and holding the uncertainty. I am born into this human body and one day this human body is going to wear out completely. But in the meantime, I choose to celebrate another year of solid value that I have gotten out of this body.

So for me, I will look both forward and back, to the future and the past. And then my friends and I will go yoga bowling.