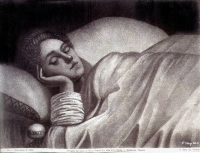 A recent article in the Sunday New York Times Style section discussed the issue of sleepless middle-aged women.  The piece, entitled,  “Mother’s New Little Helper—What gets many women through stressful days?  A little pill they take at night” was a little misleading.  Yes, it’s true that the use of sleeping pills has been on the rise, and that the takers are primarily women between the ages of 40-59, but there is no new one-size-fits-all pill that all these women are taking, and it seems that not all women desire sleeping through the night.

According to the article, the reasons for sleeplessness, or insomnia as it were, are not terribly wide-ranging.  The article states that women either have trouble falling asleep, or are up in the middle of the night stressing about the day’s events, and what needs to be done.  Some have trouble turning away from various instruments of technology that inhabit their lives, noting that “It is hard to stop yourself from taking one last just-before-bedtime peek at the screen before calling it a day”.

What these moms are thinking of, in particular, is notable: “Did I send in the permission slip by deadline?  Should I chaperone the field trip?  Do Carrie’s dance shoes still fit?  Is Girl Scouts this week?…” One mother did admit, “Stupid stuff, when it comes down to it.”  These women are pouring into the offices of sleep specialists.  One doctor remarked, “A lot of women I see don’t prioritize.”  That sounds right to me.

Some mothers highlight utilizing the time in some way because it’s the only time they have for themselves, when there are no demands or the needs of other’s to attend to.  The author stated, “One benefit of the 3-4 a.m. wake-up is that it gives women the rare time to actually check items off the list.  Some 4:30 a.m. wakers even relish the extra hours, getting up to reorganize the linen closet or returning e-mail.”

On the one hand, the article points to the growing trend of these women to use some sort of sleep aid to address their insomnia.  On the other hand, and really the idea the reader is left with is the use of this time for something “productive”, and that this time is relished.  I came away with confusion.  Swiss cheese, actually.  Too many holes in the story.

The “mother’s little helper” Valium craze of the 70’s is not really congruent with what is being presented in this article.  Although I am not an expert, I am an “adult child” of a former Valium user in the 70’s.  Although in the case of my mother there were many other issues present, one was certainly being emotionally overwhelmed by running a household and bringing up two children.  It seems to me it was another variation of the Miltown trend of the 50’s, and that if we go back further in history, we may uncover each decade’s “answer” to the issues of the time.

I certainly don’t judge the use of contemporary sleep medications for those who are plagued by serious insomnia.  I also don’t want to criticize the women who were highlighted in the article.  I do question the wisdom of being up at night thinking about permission slips, and wonder if there is not something a little deeper going on.  What may seem like high-class problems, are very real to them, obviously causing strain.  I think it behooves anyone who finds oneself not being able to turn the computer off at night, if this is truly how they want to live.  This is especially so if they are losing sleep over it.

How this can be addressed in a much broader, meaningful way? Why do these women feel that they have to worry about each and every component of their lives and the lives of their family in the middle of the night?  And why is it that these women can only find time and space for solitude in the middle of the night?  Two comments that were mentioned in the article rang true for me, but were not fleshed out.  “Some women blame their own perfectionism”, and “I think much of what drives it is our need for control.”  These statements open up to the opportunity for some real healing.  Perfection is like the hamster on the wheel.  Either you stop and realize you’re tired and need a break and accept your limitations, or you die on the wheel.  I think this also feeds nicely into the issue of control, as perfection can be a component of control, and vice versa, I suppose.  So, ladies of the New York Times article, you have choices.

What if the permission slip is late?  And what if Susie Q has to wear tight dance shoes to one more class?  It’s ok.  I swear it’s ok.  You’re not bad, or wrong, or negligent.  You’re human.  And if you find yourself up in the middle of the night with the urge to reorganize something, how about asking yourself what you can do-just for you-in the dark, quiet, beautiful solitude of the night?  Maybe your answer will be to get some more sleep!

Postscript: Another blatant omission in this article was the hormonal issues that women in this age range may be facing.  Perimenopause and menopause often cause sleep disturbances.  Whether or not this is part of the problem, the opportunity for self-reflection is clear.