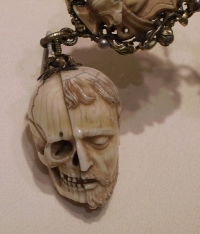 Many people have tried not to, but nobody has so far succeeded in ultimately defeating death.  Every single human being ever born must face death.

This is a scary fact.  People will do all sorts of things to escape it, believing death to be unfaceable.  Much of world religion can be seen as a way to protect us from the cold fact that, one day, we will cease to be.  Of course it is true that we have defenses because we need them; it can be quite dangerous to strip away a person’s defense mechanisms and expose them directly to a truth they cannot yet handle.  But is the American denial of death serving us well

We deny death in America with our obsession with youth and beauty.  Plastic surgery and Botox are de rigueur because age here equals proximity to death.  American Idol has a maximum age limit for competitors, as though talent were constrained only to the inexperienced at life.  To land a role on television almost requires one to be absurdly beautiful; even people playing bookish nerds are extremely muscular under their button-down shirts.

We deny death with our funerary practices.  The body, which used to remain in the home for a few days, is whisked away to sterile facilities within hours or even minutes of the person’s death.  When we next see our loved one, they have been dolled up to look as lifelike as possible.  Our visit to the funeral home is like any other business transaction.

We deny death through our toileting practices.  For most of history, toileting has been a much more communal event.  Eliminating waste took place in semi-public facilities.  The outhouse had more than one hole in the ground.  Now we prefer not to remind ourselves or other that we have body functions or even bodies at all – because bodies wear out.  They are the root of our mortality.

This extends as far as bathing daily (a ridiculous, unnecessary and wasteful practice) and slathering ourselves in deodorants and fragrances designed to cover up the natural smells of our bodies.  Again, no body means no mortality.

We are willing to go even further than this.  We tell ourselves stories of a literal rebirth in the afterlife, a place where we will awaken exactly as we were in life minus all the problems of living.  And we are willing to defend these stories, ironically to the death.  This despite the fact that no human has ever verifiably returned from death with evidence of this condition.

Even scientists uncomfortable with the idea of dissolution are now able to contend that something of you survives your physical death.  Quantum theory states that information, like energy, is never destroyed.   A misunderstanding of Quantum’s use of the term “information” makes it possible to assert that the data stored in your brain explodes out into the cosmos when its constituent parts are freed from their temporary union.

Unfortunately for this theory, the information in question here has only to do with quantum states and entanglements, not your grandmother’s recipe for corn tortillas or the time you talked to the parrot at the pet shop.  The universe is fundamentally ignorant of these things once you have passed.

But let’s assume for a moment that there is an afterlife.  Let’s even assume it is not unknowable or unproveable – maybe the folks on Ghosthunters really have captured statements from eternity by leaving tape recorders running in empty rooms.  Even so, death still happens to us, and the form in which we continue, discorporated, is something other than us.

Our bodies are part of our selves.  When we begin to lose our proprioception – the body’s sense of itself – we start to become irrational.  We cannot recognize our limbs any more as part of us and either believe they are everyday objects or wish to amputate them.  Strokes can cause hemispheric neglect in which half of the world does not exist – and we do not recognize its absence any longer.  Life without a body might be a distillation of our ‘self,’ but it will also be a loss of what your self is now: an embodied self.

Or take the quantum case.  You are dissolved into the material components of your body and these parts return to the background energy of the universe.  Your knowledge continues on without your consciousness, merged into the greater whole.  But the agency you once had is gone, and your awareness of this perhaps blissful state is gone.

Even assuming a magnificent heaven in which we bath in light and grace forever takes away the idea of the doubts and pains that make us noble.  Your human life is full of distress and testing, the things that make living courageous rather than banal.

In short, life is a journey towards unlife.  We exist here and now, surrounded by infinities of time and space – and infinite past and future without us, a universe both incomprehensibly large and existing on unimaginably tiny scales.  During this brief, shining moment we prefer to ignore the infinite because it bookends our own finitude.  But it is our very brevity, our very struggle to exist in this great darkness that makes us shine so bright.  And in the end, is the idea of not existing really so terrifying?