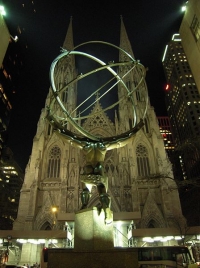 Ayn Rand’s “The Fountainhead” is about an iconoclast (Roark), a man with a vision and the character to see that vision manifest in the world.  Along the way, he is beaten down and tormented by “second-handers” who not only mock his vision but sue him for ineptitude and steal his company.

In the end, this iconoclast triumphs over all the second-handers, builds a huge skyscraper as a testament to ego, and gets the girl of his dreams.

The book is about the conflict between individuality and collectivism, the virtue of being selfish rather than accommodating.  Rand portrays those who accommodate, who listen to criticism and incorporate feedback, as weaklings and fools.  They are ultimately the losers in this story.  The winner is the man who does what he wants no matter the rules, no matter the opinions of others, and no matter the consequences.  He forces himself upon the world the way he forces himself upon the woman who eventually marries him – written long before the “no means no” movement, Dominique demands to be taken by a strong man and marries her rapist.

Philosophically, there is a lot to be said for doing what you think is right, no matter what.  The Nuremburg war trials would never have happened had people been capable of this sort of moral iconoclasticism, saying “no” to authority and “yes” to their sense of morality.  But the morality portrayed here is a psychopathic one, without love, without concern for one’s fellow humans, without compassion, and without constraint.  A strong theme in this book is “take what you want and damn the rest.”

We live in a culture with a strong sense of individualism, and we admire someone willing to risk it all for their vision.  We like to think we would not be where we are today without the vision of a few strong-willed men.  It is part of our American mythology.

The trouble is when we start bringing these ethics into caring professions.  The 80’s and 90’s saw the rise of Cognitive Behavioral models; the 90’s and 2000’s saw the beginnings of the HMO movements; and the last decade or so has shown how powerful people with vision and individualist ethics have corrupted the mental health system.  Drugs have become the new treatment standard, compassion has been discredited and dismissed as a tool of healing, and those of us “second handers” not making billions of dollars of profit from the medical-insurance-pharmaceutical complex are set to squabbling amongst ourselves for whatever scraps fall off the table.

At the macro level, mental health has been robbed of compassion in favor of profits, of that massive, gleaming, phallic skyscraper reaching up into psychopath heaven, where you can rape who you want and they will love you for it.  At the micro level, even in therapy this philosophy manifests.

A client of mine was on the rebound from an orthodox psychoanalyst.  This person said the analyst diagnosed her as a narcissist, and their work together was very difficult and harrowing.  The analyst claimed to be the leading student of narcissism in America.  Was it a coincidence that my patient was diagnosed as a narcissist?  Or were they a problem that looked like a nail because the analyst was so invested in hammers?  My diagnosis was much different.

Over time, sufficient evidence surfaced to begin to guess the analyst in this equation was possibly narcissistic.  In any case, they fit the Roark profile: practicing in an outdated field despite the general opinion that orthodox psychoanalysis is dead and deserves to be; specializing in a little corner of that field that has major problems in modern interpretations such as the DSM IV; and forcing this model of neurosis on unsuspecting but ultimately compliant patients who worshipped the analyst for it.

I suspect a therapist would better be the opposite of Roark.  Our primary source of feedback will be our client or patient.  Absolute rigidity, forcing upon them our vision – whether of health or of illness – would be immoral.  Being unswayed by science would have us ignoring best practice.  Ignoring the rules could be literally criminal.  And if you figuratively rape your patients or clients by forcing your vision upon them, have they been helped or harmed?  Van Kaam would suggest any change imposed from without is meaningless at best and immoral at worst.

Some level of iconoclastic thinking is needed else we become Nietzsche’s Sheppardless herd, thinking dissent is madness.  And sometimes we need extreme positions to pull us towards a middle ground.  We cannot accept the status quo uncritically.  But this generally has to be in the context of a civil society, considering the needs of others.

Take the DSM-5 controversy.  Are the people arguing against too hasty a publication the iconoclasts here, as the medical model of psychology dominates the practice of therapy, or are the people behind the DSM the iconoclasts, standing in their corner offices demanding more corporate profit?  Which group of people is considering the needs of Americans, of humans, of the people we are here to serve, and which is considering only itself and its vision?

It would be difficult to say.  We all have our own reasons and we all are doing what we think is right.  It is possible there are a few psychopathic Roarks on each side.  Ultimately, however, most everyone seems to want what is right as they understand it, based on an understanding informed by feedback and dissent.