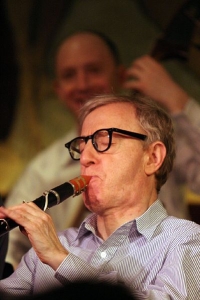 Woody Allen says that he was basically a happy child until around the age of five when he came to realize that “all this,” meaning life, ended at some point. In the recent documentary about his life that aired as part of PBS’s series “American Masters,” this quotation is juxtaposed with a scene from the film “Annie Hall” in which a young Alvy Singer is in a doctor’s office explaining to the doctor that he sees no point in doing his homework because he recently learned that the universe was constantly expanding and would eventually explode. It did not matter to Alvy that the doctor tried to tell him that we needed to live each moment fully in the meantime, or even that his mother berated him for paying attention to things that were not “his business.”

Leymah Gbowee, the 2011 Nobel Peace Prize winner, tells the story in the documentary “Pray the Devil Back to Hell” that she had a dream one night—what she called a “crazy dream”—where she was telling members of her church to band together to help stop the war in her home country of Liberia. A single mother with several children, she thought there was no way she could deliver this message, but after consulting with friends and other church members, she spoke her piece. That began a movement that brought together Christian and Muslim women and eventually ended the war in Liberia and brought down the corrupt regime of Charles Taylor, even though each day, Leymah and her fellow women woke up wondering if that was the day they were going to die.

Existential angst and death anxiety take many forms, some more real and some more imagined than others. The films of Woody Allen have been holding up a mirror to many of our own existential issues almost since he started making films. His films struggle with life and death, with meaning, with whether there is order in the universe. And yet, he says that in his own life, he takes no particular stand: “To me,” he said, “there’s no real difference between a fortune teller or a fortune cookie and any of the organized religions. They’re all equally valid or invalid, really. And equally helpful” (The New York Times, 2010). However, Allen does note regarding the making of his film “You Will Meet a Tall Dark Stranger”: I was interested in the concept of faith in something. This sounds so bleak when I say it, but we need some delusions to keep us going. And the people who successfully delude themselves seem happier than the people who can’t” (The New York Times, 2010).

Allen might call prayer or belief “delusion,” but for Leymah Gbowee and her compatriots it was nourishment, the stuff that kept them going. Gbowee talks about how the one of the few weapons they had as women was to deny their husbands their bodies. So, in order not to make the husbands angrier in the process, the women just said they were celibate in prayer. Phrased this way, some husbands even joined their wives in prayer.

Bob Herbert, now a former columnist for The New York Times, when writing for that paper about Gbowee and her movement said that “Prayer seemed like a flimsy counterweight to the forces of Charles Taylor, the tyrannical president at the time, and the brutally predatory rebels who were trying to oust him from power” (The New York Times, 2009). Under Taylor’s regime, tens of thousands of people were dying, rape was commonplace, even by child soldiers, and many, especially children, were starving. Even the rebels fighting Taylor were corrupt and using these same methods. No one and nowhere were safe. Gbowee also talked about the experience on a recent episode of “The Daily Show with Jon Stewart” where she described hundreds of women camped out daily in the fields in blazing heat. But nothing would deter them.

Eventually Gbowee and her women staged a sit-in outside the peace talks supposedly being held to end the war but in actuality going nowhere. The end result was that Charles Taylor was charged with war crimes, a new government was formed in Liberia with Ellen Johnson-Sirleaf sworn in as president—the first woman president of an African nation, and co-winner of the 2011 Nobel Peace Prize with Gbowee and Tawakel Karman, a Yemeni women’s activist and journalist.

But if Woody Allen and Leymah Gbowee both showed up in our office as clients, would we treat their existential issues differently—with Allen musing over death anxiety while watching the New York Knicks play basketball from some of the most expensive season ticket seats in Madison Square Garden—or Gbowee who actually lived with the real experience of death every second of her life for close to 20 years and continues to fight for oppressed women all over the globe?

This is an important question for us as therapists and psychologists to ponder because these are situations that really require us to bracket our assumptions and to put away all our preconceived notions of what WE THINK their lives might be. It truly may be torture to wake up every morning and be Woody Allen while it may be a blessing every day to wake up and be Leymah Gbowee, in spite of the experiences they have had in the past and what we have read about them in newspapers and books, and seen about them on film.

In his introduction to “Psychotherapy Isn’t What You Think,” Jim Bugental proposed three key patterns he believed essential to the practice of existential therapy:

While some existential therapists may argue that this gets away from the here and now of the experience, Bugental’s approach is quite relevant when looking at these two life stories. Each of their life stories—or at least what has been revealed to us—does indeed account for what we have seen of their present ways of being. Woody Allen has had the material resources and financial comfort to deal with his search for meaning through art, stimulating his audience to discuss many of these same questions they may have been too uncomfortable perhaps to discuss without this guise of “having a discussion about the film.” Gbowee, on the other hand, used the only resources she had—her voice, her mind, her persuasiveness, and her body—to sit in and stand up for what she believed what was right and true, and to convince others to do the same. And that grassroots movement created real political change in West Africa—the question now is now deep and lasting it will be.

But again the key is not to jump to the easy stereotypical conclusions on either side—that one or the other is less deserving because of their relative wealth or power or status or previous work or standing. Existentialism states that there are only two givens: that we are born into a human body and that we die. Both these people have recognized these givens and accepted them into their daily existence. And they know that everything else in life is about choice. And both Woody Allen and Leymah Gbowee in their own ways, in their respective fields, have made some powerful choices.