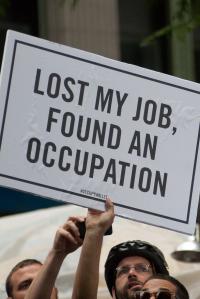 I had a sense of déjà vu when I heard that the “protester” was Time magazine’s Person of the Year.

I remembered images of the Chicago protesters who arguably denied us the experience of President Hubert Humphrey and my personal memory of the huge protest of the arrest of Black Panthers in New Haven.

My role was to pick up Abbie Hoffman in New York and drive him up there for the rally. We had a wonderful talk about the role of symbolic actions and their impact on society (he was a Brandeis University social science graduate). In our communal household nearby, we had meetings of concerned faculty and students who were looking for lessons to learn from the confrontation. I loved the kinetic energy at the Rally on the Green as world-famous people stepped up to the microphone in front of thousands, surrounded by helmeted Darth Vader-like national guardsmen who were actually quite scared to be there. We were being heard and our elders were responding to our demands!  When crowds at other rallies were attacked and arrested, I felt the outrage and self-satisfaction of a job well done.

In the Arab world, I am deeply moved by the willingness to stand up and ask for change. But here in the U.S., I find myself less moved by the Occupy Wall Street protests as deeply as I share (what I think) are their basic goals. I am finding that the coverage of them has been more about their behavior—whether the tents will stay or go—rather than keeping the focus on the continuing concerns about irresponsible financial behavior. I remember how back in the ’60s, the focus also shifted to the behavior of the protesters rather than their message. That seemed not entirely helpful or useful.

The protesters almost seemed to cooperate in changing the subject to them.

I remember then—and now—being put off by the absolute tone of the outrage. Sam Keen wrote a powerful book, Faces of the Enemy, that suggested that it was easy to project all of our evil on to another people or culture as long as we did not see them as fully human or sharing anything with us. This was the mechanism of hate and warfare, but it is also the mechanism we may be using to confront those outside of us.

I work on Wall Street with concerned financial people, with socially responsible investors, and also with conservative, libertarian and free enterprise advocates. I find many of their views to be responsible and worthy of consideration, and I find many of them personally admirable. They are not evil, though we can surely see evil and destructive and incredibly “greedy” actions and policies that come from their community.

Inside Saybrook, we have had some dialogue between those who talk about change from the perspective of being “outsiders” and those who see it from the standpoint of being a member of a community with diverse views. What I see in the lines of protesters is deservable anger, but also a sense of entitlement—that their anger and a feeling of righteousness is enough. My concern is that the purpose and end of protest sometimes can be personal identity—a feeling that “I stood up, therefore I am virtuous” and, therefore, that is enough. After all, the baby boomers of the ’60s have been repeatedly characterized as the “me” generation whose protest morphed into a feeling of satisfied entitlement and indulgence that has given fuel to more than one conservative social analyst.

My colleague, Cynthia Scott, and I developed a model of stages of personal and organizational change two decades ago, which offers some guidance. Our model says that people live for a long time in denial of the need to change until some trigger event—illness, getting fired, going bankrupt , addiction, losing money or being merged—leads one to finally understand, maybe too late, that change is needed. That is followed by a stage of resistance where one’s anger, fear, anxiety, or sense of injustice emerges, coloring one’s reaction. This is the stage of protest where I see the emotional awakening that leads to action.

At some point, however, the resistance phase has to continue to move through acceptance—taking a page from Elizabeth Kubler-Ross—into a new phase of exploration of alternatives and constructive engagement in building the new pathway. This is where I fear that the protest stops as the next phase involves understanding that those we oppose are not all evil and we are not all good. We have to reach out and engage and find a way to bridge the huge divide between cultures. This may not be welcome and demands social skills and emotional intelligence.
This is the stage protesters must prepare to enter where they face a different type of challenge—not as glamorous or easily fulfilling. It is easy to be “against” and you don’t need formal leaders or organization, but when you are “for” something there is real work to do if you want results. You need to organize, define goals and work hard for them with some compromise and learning from others.

As a student of social revolutions and an observer of those happening today, I see examples of this challenge. After the Mubarak regime toppled in Egypt, it seemed that change was happening. Now the building of a new society is in danger as the religious and military cultures of the society must engage actively with democratic and human rights elements to create something that works. The danger and the alternative is the next stage of the two grand-parent revolutions—the autocracy of the French and Russian revolutions. A “dictatorship of the proletariat” is a dictatorship.

So I wonder if the protesters who are succeeding today can become builders tomorrow. Will the people who are able to name the abuses be able to engage people who have their own power and constituency in finding policies that help us move forward. Will the protesters set an example by reaching across the lines and engaging those who disagree in trying to find ways to move forward? The world is looking on at the U.S. democracy to see how our style of government will deal with long-term, deep, structural issues and overcome the 50-50 gridlock that we currently experience. What good is a democratic government when every action of one half is negated by the other half—when compromise itself is unreasonable and a group would rather be pure in their beliefs by ignoring those of the other half of their community?