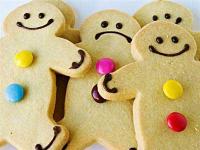 I’m glad the holiday season is over.

Don’t get me wrong. I’m no grinch. I love watching the Thanksgiving Day parade on TV, trimming the Christmas tree, opening presents, and embracing the optimism that the dawn of each new year brings. But there’s a dark side to the holidays that I don’t like.

Let’s face it: it’s tough to be happy or jolly or satisfied when you’re not. And when you perceive that everyone around you feels happy when you don’t, this internalized self-examination feels all the worse.

The trigger that causes this perceptual incongruence is essentially self-reflection. But, as I’ve already described, this kind of self-reflection is personally damaging, disempowering, and victimizing. It isn’t learning and it’s far from transformative.

A person who engages in negative self-talk, especially during the holiday season, fails to clearly examine his or her existing frame of reference and assumptions clearly. They don’t stop and say, Wait, I probably think so-and-so is doing better than me because deep down I want the same life they have. But, hang on… do I really know much about their life beyond what they’ve said? How much do I know about this person and what do I have that makes me unique by comparison?

Instead, the internal narrative goes a little more like this: So-and-so’s happy and fulfilled with his or her life and career and outlook and I’m miserable when I should be in the same position or in a better position than they’re in. They shouldn’t be as lucky. The negative self-talk just gets worse and worse from that point on.

Consequently, a person stuck in this perceptual web has a really hard time identifying the real reason why they feel severely bummed or distraught when everyone else isn’t… when, really, who’s to say others aren’t a little bummed too? No one’s perfect, after all.

This narrow, insular perspective doesn’t introduce the afflicted person to new frames of reference and it doesn’t encourage him or her to transform their point of view or habits of mind so learning can occur. Instead, the person remains locked in “why me?” thinking. That kind of thinking hinders any chance for personal transformation—or what Mezirow described as “a movement through time of reformulating reified structures of meaning by reconstructing dominant narratives.”

And so the person enters the new year shouldering this kind of thinking and noticing how it crops up every so often before it takes prominence once again during the next holiday season.

I say the best prescription in dealing with the holiday (and post-holiday) blues is tackling those assumptions head on. Don’t see yourself as less than the other. Value what they have and value what you have. See yourself as unique and identify the thinking patterns that bring you down so you can curb them. Learn from yourself, the talents you have, and the road you’ve traveled.

“Pretending you’re in control even when you aren’t is a recipe not only for mistakes, but for not learning from mistakes,” Meadows explained in her 2008 book Thinking in Systems: A Primer. “What’s appropriate when you’re learning is small steps, constant monitoring, and a willingness to change course as you find out more about where it’s leading. That’s hard. It means making mistakes and, worse, admitting them.”

As this new year opens, try not to see yourself as a victim of the circumstances around you or as lesser than anyone else. That’s draining.

See yourself, instead, as a humble learner of the self and the other.