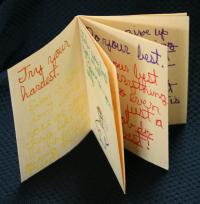 As a child, I loved creative stuff.

One time after watching a Pink Panther cartoon circa 1984, I grabbed a few sheets paper, turned them sideways, and wrote the storyline of the episode on the right side of each sheet. Sitting on the floor of my bedroom, with my trusty Fischer-Price record player at my side serving as a pretend typewriter, I shifted between writing and “typing” the tale.

Once the writing part was done, I drew the illustrations—the sketches of a 5-year-old—on the left side of each sheet. After I finished the drawings, I folded the sheets in half and stapled them together along the spine, or fold. I then drew the cover art and, voila: I was a book author!

It’s a childhood moment that’s frozen in my mind because it was the one time I really remember letting go and tapping into my creative side or, rather, letting my creative side tap into me.

It’s also the one memory that foreshadowed my future. Well, sort of. Twenty years later, I was writing for publication—as a journalist, not a book author.

And I was unhappy about it—severely unhappy about it. I loved telling stories, but I didn’t like the daily grind or the mounting stress or the dueling egos or the daily conflicts that a journalist has to put up with constantly. I particularly grew tired of hearing or, rather, “allowing” my bosses to call me “green” or “cocky” or “arrogant” or “too sensitive” let alone having one boss call my writing style “emotionally draining” one time.

I found myself caught in a trap of meeting expectations—expectations set by authority figures and hyper-competitive colleagues who barely knew me as a person outside the newsroom. I took their criticisms to heart and tried my hardest to not come off as “green” or “cocky” or “arrogant” or “too sensitive” for the sake of making these people—people who I barely knew as well—proud of me.

So during my five years as a newspaper reporter I worked hard to prove their assumptions of me wrong. The harder I worked though, the bigger I failed. And, by age 27, my enthusiasm for writing had completely fizzled out along with any iota of faith in myself or my creative abilities.

In the fall of 2010, I learned that author Parker J. Palmer had a similar experience when I read his 2000 book, Let Your Life Speak: Listening for the Voice of Vocation, for an organizational systems course at Saybrook.

Neither was true, but he proceeded along a professional path that made those people—those voices of guidance and authority—proud.

As a result, Palmer also hit that unavoidable “wall” of depression and discontent years later. So he went back to his childhood to find his true self.

As a boy, Palmer wrote, “I spent endless hours, after school and on weekends, designing, crafting, flying, and (usually) crashing model airplanes made of fragile balsa wood. Unlike most boys, however, I also spent long hours creating eight- and 12-page books about aviation. I would turn a sheet of paper sideways; draw a vertical line down the middle; make diagrams of, say, the cross-section of a wing; roll the sheet into a typewriter; and peck out a caption explaining how air moving across an airfoil creates a vacuum that lifts the plane. Then I would fold that sheet in half along with several others I had made, staple the collection together down the spine, and painstakingly illustrate the cover.”

“I had always thought that the meaning of this paperwork was obvious: fascinated with flight, I wanted to be a pilot, or at least an aeronautical engineer” Palmer continued. “But recently, when I found a couple of these literary artifacts in an old cardboard box, I suddenly saw the truth, and it was more obvious than I had imagined. I didn’t want to be a pilot or an aeronautical engineer or anything related to aviation. I wanted to be an author, to make books—a task I have been attempting from the third grade to this very moment!”

Staying awake to our innate, childhood interests is difficult to do as we mature into adulthood. It’s amazing how the influence of everyone we encounter in life—parents, neighbors, teachers, friends, colleagues, bosses, religious leaders, professors, and spouses, to name a few—shape and reshape our perception of self; many times for the worse instead of the better.

Without realizing it, we often give these people—many who are well-meaning in their intentions—the power to drag us very far away from our true, inner self, particularly in terms of the vocation we choose. Parker said when this happens, we end up “wearing other people’s faces.” And this act dims our true sense of self.

“If you doubt that we all arrive in this world with gifts and as a gift, pay attention to an infant or a very young child,” Palmer wrote. “From the beginning, our lives lay down clues to selfhood and vocation, though the clues may be hard to decode. But trying to interpret them is profoundly worthwhile—especially when we are in our twenties or thirties or forties, feeling profoundly lost, having wandered, or been dragged, far away from our birthright gifts.

“Those clues,” Parker continued, “are helpful in counteracting the conventional concept of vocation, which insists that our lives must be driven by ‘oughts.’”

You know something? I think he’s right.