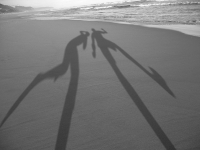 Carl Jung brought into our consciousness the archetype of the shadow.  He consistently warned us of the dangers of not integrating our shadow.  Consider the following two quotes:

Taking it in its deepest sense, the shadow is the invisible saurian tail that man still drags behind him. Carefully amputated, it becomes the healing serpent of the mysteries. Only monkeys parade with it.

Unfortunately there can be no doubt that man is, on the whole, less good than he imagines himself or wants to be. Everyone carries a shadow, and the less it is embodied in the individual’s conscious life, the blacker and denser it is. If an inferiority is conscious, one always has a chance to correct it. Furthermore, it is constantly in contact with other interests, so that it is continually subjected to modifications. But if it is repressed and isolated from consciousness, it never gets corrected.

Zhuangzi employed the same metaphor from Jung of the tail following us and running away from our shadows in the following story titled “Flight from Shadow”:

There was a man who was so disturbed by the sight of his own shadow and so displeased with his own footsteps that he determined to get rid of both.  The method he hit upon was to run away from them.

So he got up and ran.  But every time he put his foot down there was another step, while his shadow kept up with him without the slightest difficulty.

He attributed his failure to the fact that he was not running fast enough.  So he ran faster and faster, without stopping until he finally dropped dead.

He failed to realize that if he merely stepped into the shade, his shadow would vanish, and if he sat down and stayed still, there would be no more footsteps.

Finally, John Donne, an English poet and minister wrote a hymn titled Hymn To God, My God at a time when he was gravely ill, possibly at his deathbed, believing that he was likely to die.  The third stanza of the hymn is included below:

I joy, that in these straits I see my west ;
For, though those currents yield return to none,
What shall my west hurt me ? As west and east
In all flat maps—and I am one—are one,
So death doth touch the resurrection.

Commentators  understand that Donne recognized that life and death are one and that death is very much a part of life.  Donne employs the beautiful imagery of a map such that on a flat map of the whole world the far east (the rightmost edge of the map) and the far west (the leftmost edge of the map) are places that touch on a globe or in the real world.  What therefore appears as opposites – east and west – in time come together, if we follow one or the other long and far enough.  The quickest way for anyone to reach the sun and the light of day is not to run west, chasing after the setting sun, but to head east, plunging into the darkness until one comes to the sunrise.

We are all chasing the after the setting sun.  We all want to bask in the light of day.  We all seek enlightenment.  We all seek happiness which as Zhuangzi reminds us is absurdly elusive.  Yet, wisdom, enlightenment and happiness as all of these passages above, including the first chapter of the Tao Te Ching (/posts/11-14-11) tell us that we must step into the shadow, or darkness in order to find wisdom.  The more we run away from darkness, chasing after the setting sun, the further away we are from our goal.  The way to joy is through despair.  As Donne reminds us, we must plunge into the darkness in order to find the rising sun.