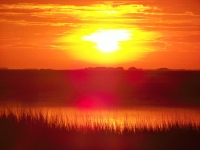 What role does nature play in your life?  My family is divided between city and country dwellers.  While I appreciate the numerous cultural advantages of living in the city of Philadelphia, occasionally I am annoyed by the downside – the noise, ugly alley and street views from our windows, not being able to see the stars, and most of all, the difficulty of on-street parking.  My brother and sister, who live in Oregon, love the access to nature that country living provides.  Dorothy Parker purportedly once said, “When you go to the country, kick a tree for me!”  While I am neither a “tree kicker” nor a “tree hugger,” I recently had an opportunity to consider the differences between urban and city environments, and the impact nature can have during two very different vacations.

We were moved when we visited Anne Frank’s house and read descriptions of the Dutch Resistance Museum.  I thought about the historical impact World War II had on the developing Existential philosophies of Sartre, Camus, de Beauvoir, and others.  I remember reading a statement by Sartre who said the German occupation of France forced him to focus on freedom and that every free thought was an accomplishment.  For Anne Frank and her family, their “resistance” took the form of hiding in an attic for more than two years.  Because they were Jews, it was an attempt to survive.

Several weeks after we returned from Amsterdam friends invited us to stay at their home on Fripp Island, South Carolina.  The beauty of going to Fripp Island in January is there are few people and abundant wildlife.  We saw deer at dawn and dusk; we also saw raccoons and possums.  When was the last time you saw a sign for a “Terrapin Crossing”?

From the back porch we saw red male cardinals, blue jays, and wood peckers.  One morning, as I was glancing out the window, I saw a huge bird fly by and land on a tree in the back yard.  It was a blue heron.  Another morning I watched a heron wading in a stream of water.  At times it was very still.  When it saw a fish, it would swoop down with his long beak and catch it.  I watched in amazement as the heron caught a fish at least seven inches long and gulp it down.

We met people who live on the island year round and asked, “Where is the best place to view the sunset?  The sunrise?”  We tried them all.  In the morning we headed to the beach where we were alone except for gulls, sandpipers, and pelicans as they flew by in formation.  We noted the lacy design made by ocean foam on the sand.  At the end of the day we watched spectacular sunsets; at night we looked at the stars.

At the midpoint of our vacation we took several days from our time at Fripp Island and travelled to Florida to see family and friends.   Unfortunately, something occurred that distressed us.  To provide details would be distracting.  However, needless to say, in practically every instance when I become deeply troubled, it involves relationships (or lack of them) with other people.  I can’t remember ever being deeply troubled by nature – by the way birds fly, the pattern sea foam leaves on the beach, or how the stars look at night when I can see them.  Even in times of natural disaster, such as Katrina, my distress comes from the human response (or lack of it) to the event.  As Sartre said, “Hell is other people.”  With the state of mind I was in, I felt as if there were “No Exit.”

While in Florida we visited dear friends – the ones who generously loaned us their home on Fripp Island.  They have a spectacular view of the Atlantic Ocean from their living room.  As often happens when visiting with couples, at some point men and women pair off and have an opportunity to talk about things that are important to them.  I had an opportunity to talk with my female friend about what was bothering me; she shared her concerns as well.  Our talk concerned relationships – what else?  In this case, relationships between parents and adult children.  At the end of our conversation and visit, I marveled again at their magnificent view of the ocean.  My friend responded, “Looking at the ocean provides great comfort.  I never tire of it.  The ocean reminds me there is something beyond myself.  It provides perspective.”

When my husband and I returned to Fripp Island, I was still was troubled.  I focused on nature because I was confronted by it.  I looked out over the marsh at different times of day and noticed how the colors changed.  I glanced out the windows and saw giant palm leaves.  I spent time reading.  Because of our recent visit to Anne Frank’s house, I reread her diary.  The maturity of Anne Frank, only thirteen when her family went into hiding, helped me put my concerns into perspective.  Here was a young person who knew first-hand that hell was other people.  Most impressive were Anne’s remarks about nature as she looked out of the attic window at the blue sky, the branches of the chestnut tree that glistened with rain, and the seagulls that glided by:

The best remedy for those who are afraid, lonely, or unhappy is to go outside,

somewhere where they can be quite alone with the heavens, nature, and God.

see people happy, amidst the simple beauty of Nature.  As long as this exists,

and it certainly always will, I know that then there will always be comfort for every

sorrow, whatever the circumstances may be.  And I firmly believe that nature