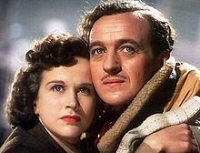 This is the story of two worlds, the one we know and another which exists only in the mind of a young airman whose life and imagination have been violently shaped by war. Any resemblance to any other world known or unknown is purely coincidental.

This introduction to Michael Powell and Emeric Pressburger’s 1946 film A Matter of Life and Death (released initially in the US as Stairway to Heaven) describes the split between what we might come to think of as “objective reality” as opposed to the subjective reality of the client’s—or our fellow human’s—story. And which one is the “truth”?

This film tells the story of Squadron Leader Peter Carter (played by David Niven), a British flyer whose plane has been shot in the last nights of the war in Europe in 1945. His crew has bailed out, and he is alone in the plane with his dead radio operator—his friend Bob—with his plane ablaze. In his last moments, he calls out on his radio to anyone who can hear him. Peter even begins to recite poetry, catching the ear of an American radio operator on the ground in England, who cannot quite make out his “unofficial” ramblings. She tries to ascertain his location, to send help and follow official protocol, but all Peter wants to do is chat and flirt. He convinces her to tell him her name—June (played by Kim Hunter)—and a little bit about herself. Peter tells June he is going to jump, and June still wants to send him help, until Peter breaks the news to her that he has no parachute—that he would rather jump than burn. He begs her to go along with his plan and spend his last few moments chatting with him. He wants to come back and visit her as a ghost and she says she could fall in love with a man like him. When he signs off, she cries in devastation.

Miraculously, Peter does not die. He wakes up the next morning on the beach because, unbeknownst to him, the conductor who was supposed to take him to the next world lost him in the heavy English fog. At first, he thinks he is dead but slowly discovers he has landed near the base where June is stationed. Sure enough, he catches up with June bicycling home on the beach following her night shift, giving her quite a start. But it is truly love at first sight, following their whirlwind “courtship” via radio.

However, this creates a shortfall in the numbers in the “other” world. The conductor arrives to escort Peter 20 hours later, after the fog has lifted, but now Peter has the responsibilities of being in a love relationship with June, something he did not have when he jumped out of his plane, expecting to die. He asks the conductor to ask the powers that be in the other world to appeal the decision due to these changed circumstances and thus the battle ensues.

The film then becomes about on the one hand, Peter believing that he is engaging in a court case in the other world to appeal his death sentence and be able to live. On the other hand, it seems he is suffering headaches and hallucinations in the so-called “real world,” which the doctors attribute to brain injury that may have started before he jumped out of the plane but have now reached the crisis point. June enlists the aid of the village doctor, Frank (played by Roger Livesey), who helps Peter straddle these two worlds.

Many schools of psychology, when confronted with a client who says they are having conversations with a “conductor who wants to take them to the next world” and must engage in a “court case to fight for their life,” would attempt to “normalize” the client and try to bring them back to so-called “reality”—where the client’s experience would more closely match other people’s experiences. But one of the keys to existential psychotherapy is respecting the client’s experience. This is exactly what Frank does. While as a medical doctor and an expert in neurology, he knew that surgical intervention was required, he also knew that it was vital first, not to deny Peter’s experiences, and second, to schedule the operation to coincide with the occasion of Peter’s trial, in order to synchronize the mental and physical healing.

And because in this case, Peter’s experiences have a direct connection with his physical well-being, it is important to look at those experiences on multiple levels, looking not only at the literal meanings but also at the metaphorical meanings and possible mind-body connections. What additional information is the client conveying through the narrative that he or she cannot express directly?

If we return to the film’s introductory lines, it tells us first that the one of the worlds is real and the other exists in Peter’s mind. However, it then goes further to tell us that any resemblance to worlds known or unknown is purely coincidental. This addition allows for the possibility of the “reality” of Peter’s experience of the other world—what some may call Heaven, although the film is intentionally vague about using terms such as Heaven and Hell that might connote a particular theology. One staff member in the other world tells Peter’s friend Bob, as she shows him the record room, that some people would love to be a clerk, and indeed a young flyer (played by a young Richard Attenborough) comments that such an existence seems like Heaven. But one person’s vision of Heaven—for instance, as a clerk—is certainly not another’s, and that is what we need to keep in mind when looking at individual experiences.

A client who comes in and tells us that he or she sees little green men in the room may sound outrageous to us, but do we really know so very much about the entire universe to state categorically that their experience is wrong and we are right? We might want to help them to not make that assertion too loudly in less tolerant surroundings, but I for one do not know anyone with enough knowledge about the universe as a whole to say that such a client absolutely could not be experiencing that.

Peter’s experience described in this 66-year-old film—surviving a near-death encounter and enduring head trauma—is not so far removed from the kinds of experiences psychologists and psychotherapists deal with in the 21st  century, especially those who work with veterans. As a result, we cannot be reminded too often how important it is to honor and respect our clients’ individual experiences, and listen to what those experiences are telling us. For the worlds described in this film actually do resemble worlds known and maybe even unknown. And that is no coincidence.