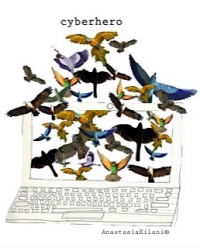 We know the internet has changed the way we shop, socialize, and schedule – but how is it changing our sense of human potential. When we dream of who we might be in a networked world, what are we dreaming about?

According to Dana Klisanin, Executive Director of Evolutionary Guidance Media Research & Design, society has focused on the negative stereotypes of internet users … like “cyberbullies” or addicts … while a new conceptual archetype demonstrating human potential has emerged and inspired millions: the “Cyberhero.”

In her recently publication “The Hero and the Internet: Exploring the Emergence of the Cyberhero Archetype,” Klisanin (who earned her PhD in Psychology from Saybrook) writes:

“The cyberhero archetype appears to recognize global threats to social and ecological wellbeing as personal threats. Rather than requiring a personal confrontation with immediate danger, the cyberhero archetype requires a personal and collective psychological confrontation with current and/or impending species-wide dangers. Rather than setting out on an epic adventure to far away lands and encountering life-threatening dangers, as in the traditional heroic narrative (Campbell, 1949/1972), the cyberhero, paradoxically, both stays at home and sets off–into cyberspace with the goal of benefiting others.”

Studying this archetype, she notes, is very much in the humanistic tradition – finding new ways that people can lead meaningful lives that strive to be extraordinary rather than limiting itself to addressing symptoms.

The questions raised by the emergence of the “cyberhero” are fascinating: is “cyberheroism” similar to conventional heroism? How do cyberheroes relate to and through their online “avatars?” Do they represent a kind of transpersonal psyche?

Kilsanin’s paper, available here, is well worth a read.