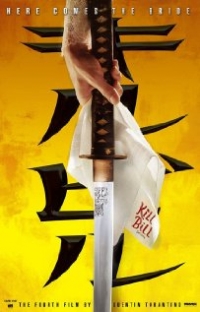 In the titular movie, Beatrix Kiddo awakens after several years in a coma brought on by the treacherous actions of Bill, her former boss and lover and father to her child.  Both she and her child are presumed comfortably dead by Bill and his employees, the Deadly Viper Assassination Squad.

But Kiddo is no longer dead.  She rises from her coma in despair.  The first two things that enter her consciousness are that she is almost completely helpless and that her womb is empty.  When last she was conscious, it was full of the aforementioned child, and she was physically the superior of just about any person.

The next thing she learns is she has been systematically raped while she was comatose.  This does not seem to impinge much on her consciousness.  She knows the people responsible are disgusting and should pay a price – which indeed they do in the opening sequences of the movie.  But she never again comments upon or outwardly laments the experience: it happened as she was sleeping.  It means nothing to her.  All that is relevant is her lost child and her betrayal.

The power to which she wills is one of vengeance, of violence, and yet it is a power.  She recovers her physicality, becoming the engine of death she was prior to her betrayal.  She engages in super-human feats of strength and endurance, as well as supernatural feats of speed and lightness (at one point running across the upraised swords of enemies as though they were stairs).

In the end, in the very final confrontation, Kiddo is brought briefly low.  Encountering Bill for the first time since awakening, he reveals that her daughter is in fact alive, that he has raised her to love and miss her mother.  He does not condescend to offer her the chance to pick up life with him where it left off, but rather makes the child the prize in the inevitable deadly contest.  Because he loves Kiddo, he first gives her a night with her daughter.

Now into this despair has entered hope.  There was no hope of anything prior to this scene.  All that could be accomplished was blood and death and grim victory.  Nothing at all could be gained by this, and Kiddo could have been killed at any point in the journey.  That was the point, after all: her life was borrowed time, fit to squander on hatred and violence as she pleased.  The very hopelessness of things gave her power.

Rollo May noted that despair, like any other emotion, serves a function in our lives.  It can drive us to action if it does not destroy us.  When we meet it, it takes courage to experience despair, to seek to learn from it, to engage with it.  Despair can make us change our lives, will ourselves to power, upset the order of things.  Perhaps we do not wantonly murder old enemies, but we do attack the problems in our lives, informed by despair.  Else we sink ever further into it, becoming as comatose as Kiddo at the beginning of the film, raped in our sleep and not cognizant enough of it to be offended except intellectually.

By showing Kiddo her child, Bill hopes to deprive her of her power.  In his ending soliloquy he talks in depth about Superman.  Some superheroes, he says, have secret identities to protect their real lives.  Spiderman is really Peter Parker; Batman is really Bruce Wayne.  At the end of a day of crime fighting, they take off their disguises and return to their mundane lives, the identities to which they were born.

Superman however, and to Bill’s great admiration, takes off his disguise in order to be the hero.  His secret identity is Clark Kent, which he dons in order to blend in with the mere mortals of the world.

What he does not mention is that Superman is powered by the warmth of our yellow Sun; Superman, Kal-El, on his home world would be no more powerful than you or I.  And he can be reduced to this ordinary state simply through proximity to Kryptonite: rocks from his home world.

Similarly Kiddo is just an ordinary mortal, although one driven by despair.  The daughter Bill shows her is intended to be Kryptonite, to reduce her to mortal status, to make her weak.  For a moment this in indeed the case.  She is completely disarmed.  Bill has the upper hand completely.  He could kill her at any time, especially as she rests next to her sleeping daughter, and again in one of the last few scenes of the movie when he shoots her with a tranquilizer dart.

He chooses not to do this.  The Kryptonite is wasted.  Bill does not reveal his reasons for allowing an even match-up, which he is destined to lose.  He allows her hope to take root, to bloom into something as powerful as despair.

I don’t think Rollo May would be terribly disappointed with Bill’s final act of nihilistic heroism.  In the end, he makes amends for his wrong action by allowing Kiddo her victory.  At the last, she walks off into the sunset with her child in her arms, the power to which she had willed herself finally spent, ready to allow love to will her to a new power.