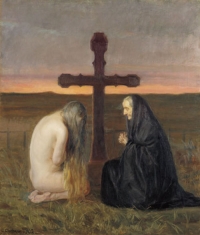 We all grieve in different ways.

Grief can hollow out a soul and pull someone down the depths of despair that can be all consuming. It is not something to ignore or to treat lightly, but grief is an inevitable in life as there are as many endings as there are beginnings.

Can grief be so painful that it would warrant a psychiatric diagnosis of major depressive disorder?

This is the question that is at the center of the long standing debate on the proposed changes in the upcoming DSM-V. In the current edition of the DSM, there is a clause that excluded bereavement under the DSM (Axis I: Mood Disorders) diagnosis for Major Depressive Episode.

The exclusion states that if a depressive episode lasts longer than two months after the loss and includes one “symptom” that is deemed uncharacteristic to grieving, e.g. suicidal thoughts, psychotic symptoms or psychomotor retardation then the episode should be diagnosed as a major depressive disorder.

The proposed change would take the timeline up from two months to two weeks. Here’s where the debate hits the fan. Right now there seems to be to opposing sides to the issue that have been debating this since the proposed changed was announced in 2010.

One side argues that the proposed changes to the bereavement exclusion (taking away the two month mark) would have the dire consequences on the lives of those who are moving through their own process of grief.

Removing the bereavement exclusion would shift the DSM diagnosis of depression to include those who may still be grieving in sadness after two weeks. The concern is that after two weeks, these individuals could be diagnosed with major depression, even though they may not be clinically depressed. It may simply be a matter of time and patience to help bring about the healing from loss.

Those on this side of the debate argue that the consequences could be more misdiagnosis, unnecessary prescriptions and the potential of having a life-long label as being depressed.

Some believe that the proposed change would not be as harmful as predicted.

The experience of grief can be so devastating that someone can be pulled into a depression so deep that it interferes with their lived experience. The state of being non-functioning can be disastrous to livelihood, relationships and health. Their argument is that with grief included as a possible precursor or cause of depression, we would be able to respond with treatment. Shortening the time period from two months to two weeks would bring people to the care they need sooner rather than later, which to some supporters of the change, would be too late.

This debate is part of the meta-issue of what is a mental disorder. Like James Bugental has stated, the experiences of depression, anxiety, grief and guilt are seen as wrong or out of the normal. The debate over the bereavement exclusion is part of a larger debate in that the proposed changes make what is really a part of life somehow more of an illness.

To put forth an answer to the original question, yes I believe that grief can lead one to experiencing not only emotional pain but physical and spiritual as well. Grief does not necessarily lead to depression in everyone. There is no equals sign here. But, that pain can be devastating enough to put someone’s life in danger. In that case, of course, any level of healing intervention is needed no matter if there was a “clinical” diagnosis or not.

The intent of psychotherapy from an existential-humanistic perspective is to not pathologize the pain of another – period. The intent is to work for the safety and well-being of another, our clients, in partnership with them. This is where I believe therapeutic relationship is so very important. Without knowing how our clients grieve we may be giving them a diagnosis that is invalid and potentially harmful.

The potential danger of clinicians stamping “major depressive disorder” on the files of those who may only be grieving deeply and painfully would be a potentially life-long stamp of a pre-existing condition. In the worst case scenario, a bad diagnosis will lead to improper treatment that will do more harm than good. Our work is to do no harm, beneficence and nonmaleficence.

The DSM is a powerful book, one that I have learned to approach with caution. Grief is not a state that we are in on a daily basis, but it is a place that many of us visit at some point in our lives. My concern is that in an attempt to help those who are suffering in their grief, we may forget that one’s grief is their own journey, unique to them and their own experience. Hopefully, this humanistic aspect will not be lost in this process of changing the DSM diagnosis for depression.