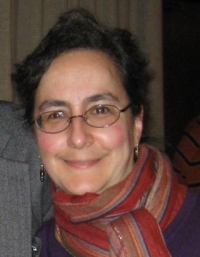 Marisa Iacobucci has been managing the symptoms of Fibromyalgia (FM) for 16 years. Because of her personal struggles with FM, she was hesitant to facilitate a Mind Body Skills (MBS) group for people with FM. Marisa did not want to hear about the progression of symptoms because she feared she would think to herself, “…is this the next thing I am going to get in the progression of this illness?” Participating in the Professional Training Program and Advanced Training Program from the Center for Mind-Body Medicine (CMBM), a core component in her master’s degree coursework, made an impact on her own FM symptoms, and that realization led her to want to help others with FM.

Marisa researched and experimented with alternative modalities and their effects because she wanted to know personally how these modalities could help her. This experimentation inspired her to share her knowledge with others and help them find new ways to cope with and lessen the symptoms of FM.

Marisa made a commitment to facilitate a Mind-Body Skills group for people with FM for her Master’s Thesis. As a facilitator and group member, Marisa knew that some of her own concerns about FM were sure to surface. The awareness of her own vulnerability, coupled by the fact that she was interested in becoming certified by the CMBM, led Marisa to enter the certification process while completing her thesis. Completing a Master’s Thesis and Certification from the CMBM was a beautiful coupling, because it included weekly supervision phone calls with a senior CMBM staff member. The supervision calls helped her manage her own feelings about FM during the process of leading a group.

The next step was to recruit people with FM that would participate in an 8-week group. Marisa used her resourcefulness, and familiarity with her community, to successfully recruit 10 people. She sent letters to physicians that included a cover letter, a copy of her thesis proposal and SIRB approval, and a flyer to post in their offices; she posted information explaining the group on local list serves. In addition to taking advantage of technology to reach people, she posted flyers in integrative practitioners’ offices.

Marisa’s statistical analysis demonstrated improvement in her participants’ FM symptoms. However, she also shared the following stories which convey a message that statistical analysis does not capture. One group member, who was newly diagnosed, made remarkable progress in her self-care skills, particularly with regard to mindful eating. This observation led Marisa to consider whether people newly diagnosed would benefit from a MBS group at the onset of diagnosis, to foster an attitude of self-care in managing their symptoms. Another group member had been trying to quit smoking, and finally succeeded through attending the group. Now, instead of puffing on a cigarette, she stops and takes a breath. Another member, who was recently robbed at gunpoint, had been suffering from extreme anxiety. After learning the “shaking and dancing” exercise, an exercise in expressive movement with music, she went home and practiced it. She then reported back to the group that during the exercise and for about 10 minutes after, she felt calm with no perceptible anxiety. She said it was the first time she felt that way in a long time. This was a huge release for her.

Marisa learned that while the modalities taught in a MBS group, such as breathing techniques, imagery, meditation, and movement, can help alleviate symptoms of FM, some people still find it difficult to commit to attending all group sessions. Although she witnessed many successes among her participants, including those that did not complete all eight sessions, she wonders what would entice people to make a full commitment. Is a financial investment or incentive the key? Perhaps a future study will provide the answer.