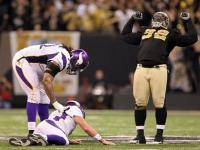 I’m about as shocked by the recent National Football League bounty scandal as Captain Louis Renault was in the movie Casablanca when he closed down Rick’s Café Américain for gambling.

To provide a little perspective, I did some math. Based on numbers from SportsCity.com, the average player salary for the New Orleans Saints was $1.8 million in 2011. A $1,000 bounty to a New Orleans Saints’ player is the equivalent of $23.50 to the average income earner in the U.S. last year. Let’s imagine that a clerk working at a corner gas station convenience store earns $10 per hour. Staying with the percentages, would $12 incentivize the clerk to go across the street and vandalize the competitor’s gas pumps? (We’ll make it $15 if the pumps are inoperable for two days.) I would submit that there’s more motivating a clerk willing to “take down” the competitor for $12 than the money. Framing an activity as a competition introduces variables that defy easy analysis.

The systems challenge runs deeper than finding people to blame and making an example of them. This story breaks precisely at a time when the NFL has been changing rules and increasing fines in order to increase player safety. NFL commissioner Roger Goodell told the New York Times that he’s particularly troubled by the bounties because they not only undermine player safety, they impact, “competitive integrity.” Does anyone actually believe that sanctions and fines will eradicate behavior that prioritizes winning over safety?

In systems theory, the pattern being played out is the “shifting the burden” archetype. The archetype describes situations where organizations impose short-term fixes aimed at the symptoms of the problem instead of investing the time and resources required to deal with the underlying issue. The short-term solution has enough impact to provide a temporary improvement, but the problem resurfaces. Meanwhile, the organization loses its appetite for implementing the longer-term, systemic solution because it sees evidence that the short-term fix is working. When the problem resurfaces, the short-term fix gets reapplied and the pattern repeats itself while diminishing the odds that the systemic solution will ever be implemented.

When my youngest daughter was 11, she decided that soccer was too physical and switched to volleyball. She used to tell us about how her soccer coach would encourage her to “mix it up” with the girls on the other team. After a game with one of the rival teams, she described to her mother and me how the coach had promised the girls ice cream if any of the defenders received a yellow card from the referee for an overly aggressive tackle. Lest we prematurely saddle up our high horses, Goodell’s aspiration for competitive integrity burdens us all to rethink how we compete.