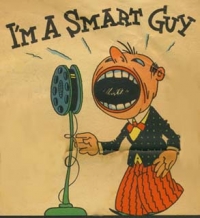 Does he really mean it?

Self-promotion often gets a bad rap, and for good reason. Most people have experienced individuals who frequently self-aggrandize and promote themselves. These individuals often are dismissed as narcissistic and self-centered. When analyzing these self-promoters, even the armchair analyst knows that it is common for this to be an attempt to cover insecurities and low self-esteem. Other times it is deemed as the result of the lack of social skills and self-awareness. With such negativity associated with self-promotion, most people avoid this behavior at all costs, even to the degree of false humility.

Yet, in their book The Truth About Sucking Up: How Authentic Self-Promotion Benefits You and Your Organization, Hernez-Broome, McLaughlin, and Trovas argue that many people need to spend more time self-promoting. They suggest that self-promotion can be authentic and even generative. Although Hernez-Broome and colleagues were writing to a business audience, the applications of this book extend well beyond the business world.

Hernez-Broome and her co-authors argue, and provide evidence from their research, that most people do not like engaging in self-promotion. They would prefer that others recognize their talent, ideas, and product simply on the basis of their merit. Unfortunately, this rarely occurs.

The Value of Self-Promotion

Hernez-Broome and colleagues provide a few compelling reasons why self-promotion is beneficial for individuals and their organization. First, it helps the right people to be selected for promotion and responsibility, which benefits the individual and the organization. Often, very talent people do not get recognized and promoted because they do not make themselves visible. Second, it creates opportunities to utilize one’s skills, advance in one’s career, and have increased job security.

As noted, The Truth About Sucking Up was written primarily to a business audience, so I would like to suggest additional benefits for those in academic and clinical work. First, academics spend a good deal of time contributing to the body of knowledge in their field. After spending many months, or sometimes years, working on an article or book, it is natural to be proud of the finished product and desire for it to be read. Many academics hope that once it is in print, people will magically discover it, read it, and love it. More often than not, most papers and many books seem to fall into a black hole of academic work with the author never knowing if more than a handful of people read the final product. Self-promotion can help for our work to have a positive impact on the scholarly community and practitioners who may benefit from our work, as well as turning the time invested into something more than a simple intellectual exercise and line on one’s vita.

In academia, students, professors, and universities benefit from authentic self-promotion. I have worked at a number of academic institutions with extremely talented professionals that were unknown and unrecognized because of their humility and lack of self-promotion; they did not promote themselves and the university did not promote the faculty. At other places, with much less accomplished and talented faculty, the university and the faculty helped create an appearance of accomplishment that is distorted and aggrandizing. Highlighting the work and accomplishment of faculty increases the visibility of the university, helps attract students that are excited to work with the faculty at the university, and increases the faculty’s satisfaction because they are working with students who share similar interests.

The Risks of Self-Promotion

In an interview on NPR, Meshell Ndegeocello gets to the heart of the distinction between authentic and inauthentic self-promotion. Although she discusses this in the context of the musical industry, it is easily adaptable to many other settings:

Either you do it for the music or you want to be a star, and those are two different things. And I just like to play music. Surround yourself with honest people, is one thing I’d say. The worst lie you can do is lie to yourself–just be clear (full interview available at http://www.npr.org/templates/story/story.php?storyId=114237531).

The Paradox of Self-Promotion and Authenticity

In part due to the dualistic tendencies in Western thought, our society has a tendency to view things in a categorical manner. Existential thought, however, advocates a paradoxical view of the world that suggests categories are often insufficient. In the case of self-promotion, the paradox is that authentic self-promotion is rarely, if ever, purely authentic.

This is part of the struggle for many, like myself, who struggle with self-promotion. It has been a difficult for me to write this essay. I am quite poor at self-promotion, though hopefully improving. Often I have sat in settings where it would be natural and fitting to promote, or even just mention, my work, yet I remain quite. In wanting any promotion of myself or my work to be authentic, I often remain quiet if I am aware of any selfish motivation. Two things have helped me improve my comfort level with self-promotion. First, the acknowledgement that motivations are never pure, and that even self-promotion rooted in authenticity has some impure motives, helped me accept my discomfort without being stifled by it.

Authentic self-promotion is often accompanied by a degree of discomfort. Those who are committed to keeping their self-promotion authentic and generative often are uncomfortable engaging it. Hopefully, thinking through the advantages can help individuals and organizations recognize the value of self-promotion rooted in authenticity.