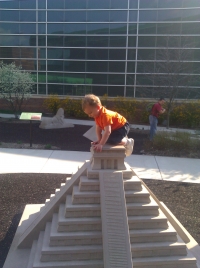 In Times Square is the Ripley’s Believe It or Not “Odditorium,” a two-story attraction filled with exhibitions many of which are just perfect to bring out one’s inner eight-year-old boy. Ancient weapons, the size 25 Reeboks from the largest woman in the world, a paper-mache replica of the average meal consumed by world’s largest man, who weighed 1,400 pounds—all of these are just perfect for bringing out our inner child’s sense of “COOOOL!”

I visited the Odditorium recently, during a time of great absurdity in my own life where I felt that the counter-absurdity of going to a Times Square tourist attraction like the Odditorium first thing on a Sunday morning with discount tickets was just the antidote! Strangely, I was right! And what I loved best in Odditorium was not the just the opportunity to have my friend take a picture of me with my head in a jar, but a chance to try out my inner Mission Impossible skills in a laser race.

Towards the end of the Odditorium experience is a room filled with laser beams, the ones that crisscross each other like those that would guard some valuable item in a museum or government building—the kind we have come to associate with Mission Impossible and other such action movies. The object of the game is to get to the other side of the room and back without breaking any of the laser beams. The winner has the fastest time AND the fewest broken beams.

I had two runs through the race, since my friend opted out. During my first run, I was a little unclear about the coming back part so my time was slow. On my second run, I cut 100 seconds off my time and broke two fewer lasers. I would have done better with the lasers had I not been wearing a dress (I had no idea a catsuit and cartwheels would be required for this adventure so I was really improperly attired) that kept dragging behind and breaking beams. OK, next time.

On the way out, we had to walk through the “Black Hole,” a fun house-type walkway through a spinning black light tube with red glowing stars designed to throw off your balance and equilibrium as you try to walk the straight and narrow. I could have stayed there all day I was having so much fun! That’s one of my favorite fun house “rides!”

Later that day, I watched the movie Finding Joe, a new film about the life and work of Joseph Campbell, with a group of existential compatriots. In this film, children act out many of myths that scholars and Campbell devotees discuss. One aspect of this film that really struck me and that came up in the film was the notion of play.

So I told the group about my experience that morning and asked them how many of them indulge that childlike spirit and play?

The room was so quiet you could hear that proverbial pin drop.

I could not remember feeling so alone in my experience.

“Honestly, do none of you ever just go out and play? Do you not spend time with children? Especially little children?” I asked them.

Even the people I knew were parents of small children stayed quiet.

My first nephew was born during my initial training in existential psychology in London, so in order to see him, I had to fly back to New York. What I first noticed was how present you have to be with children, especially babies. I’m not sure that had I not been training in existentialism I would have noticed that so clearly. Every moment I spent with my nephew, I had to and wanted to be completely present for him and with him. All thoughts of family politics and grocery lists and what I was doing later were necessarily pushed aside.

And as he grew older, and my second nephew was born—when it was not just about infant needs but playing too—all we cared about was what we were playing with at that moment. The blocks. The trains. The balls. This was probably part of how I developed the close relationships I have with my nephews—meeting them where they were and are—and playing.

Play allows us to recapture some of that sense of being in the here and now, of being in the moment, with whomever we are playing with or even if we are alone. Play is not just about “zoning out” or taking a break. The literature on childhood education tells us about the importance of play for children in areas such as the development of creativity, problem-solving skills, and relationships. But why should the learning stop in childhood? Why can’t adults have fun and work on these skills as well? Because it does require some creativity and problem-solving skills to figure out how to get over and under crisscrossing laser beams without breaking them. And one cannot be thinking about balancing the checkbook when trying to navigate those beams. Especially with the clock ticking.

Play is not frivolous.