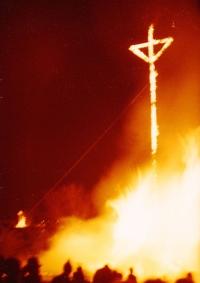 As Easter approaches I find myself reflecting on the meaning of this holiday for our contemporary American culture, as well as how it may meaningfully intersect with the existentialist framework. Perhaps what should be acknowledged immediately is the basic fact that Easter is deeply embedded within the cultural fabric of our society as a national holiday; indeed, as one of the most significant holidays within our calendar year. Historically, this has been, and to a certain extent still is, a fundamentally religious, specifically Christian, holiday. There likely are very few adults in our country who are not aware of this, at least to a minimal degree, and that it has something to do with the death and resurrection of Jesus Christ. My best guess, however, is that for a majority of Americans Easter has become and represents a largely secular holiday. It provides a reason for family gatherings, for getting together and eating a meal, dyeing and hunting for eggs, baskets of goodies for the kids, and commemorating the advent of the spring season. I wonder if it means much more to many of us than colored eggs, flowers, food, and bunnies. This seems to constitute one end of the continuum, while at the other end we are confronted with an overly aggressive and exclusively-oriented fundamentalist Christianity which demands a formal, severely literalistic adherence to traditional interpretations of the Easter event. While there are of course variations and gradations in between these extremes, these do appear to be the extremes that form the context within which we respond to the Easter holiday. The question arises, therefore, as to whether we must remain trapped within this limiting and restrictive context of meanings or transcend it with a meaning that is personally significant and genuinely life-giving. I want to suggest that we can actualize the latter possibility, and that an existential interpretation of the Easter event can provide a vital foundation for doing so.

I believe that such an interpretation is necessary to effectively counter the many tragic misconceptions regarding Easter; whether from non-Christians who often see it as an incomprehensible tale of barbaric human sacrifice demanding intellectual suicide in the illogical and irrational belief of a person being raised from the dead, or from Christians who often see it as a “supernatural” phenomenon that must be believed on the basis of an anti-intellectual faith, and in which they passively receive a ticket to heaven instead of hell in a future afterlife existence. The truly “good news” of the gospel and of the Easter event, in my opinion, is that its ultimate meaning is grounded in a depth and power beyond cute light-hearted images, intellectual belief, abstracted doctrines, and afterlife rewards and punishments. For the real meaning of Easter is that it reveals the mysterious relationship between death and life, the process of death and rebirth, in which death is transformed into a source of life. It doesn’t ultimately matter whether one believes in an abstract doctrine regarding the crucifixion and resurrection of Jesus, especially if it is only in order to “go to” heaven and avoid “going to” hell after physical death. What does ultimately matter is whether one actively and dynamically experiences one’s own death and rebirth through directly participating in the empowering reality of the crucified and resurrected Christ. As expressed in my Christmas post, if the Christ is understood as the incarnate Logos, as the Divine Ground of Existence or Being-itself become human and living a human life, then the crucifixion and resurrection of Christ means that Existence-itself has established the foundational pattern and process of death and rebirth that makes it possible for us to die and be reborn, for our death to be reborn into greater and fuller Life.

Easter can be meaningful for each of us because as finite human beings we all in our own way experience ourselves as broken, empty, deadened, false, illusory selves who are not the people we are capable of becoming and are meant to be, and we all ultimately long, ache, and desperately crave to experience the Infinite, to experience ourselves as whole, more fully alive, real, authentic human beings who are actualizing our inherent potentialities. We experience the death within us and we need to know that it is not the end, that Life is deeper and that if we plunge through to the very bottom of our death experiences they themselves will become life-giving. We need to die to our false, illusory selves, to all that keeps us from becoming our true selves, to all that prevents us from becoming fully alive. When we actively engage in this dying, this crucifixion of our unreal selves, then we are resurrected and our real selves live. The great challenge of the Easter event is in fact the greatest challenge of our human existence; we want to be reborn and resurrected, we want to be more fully alive…but we don’t want to experience the death and crucifixion which is the only path to get us there. Unfortunately and fortunately, in that sense, it is all death, and not so much a matter of life vs. death or choosing life over death, as we often believe, but rather of death vs. death, of choosing the death that leads to greater Life or the death that only perpetuates further death and leads away from Real Life and fully actualized Existence.

May this Passion Week leading up to Easter Sunday remind us that every moment we can choose to experience death as life-giving and our crucifixions as resurrections…that we can die to Live!